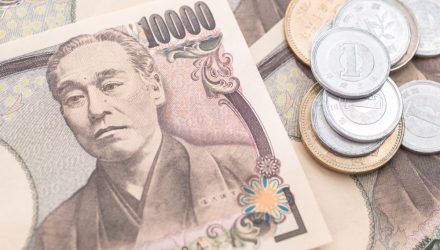 Japan currency-hedged exchange traded funds are rallying as the yen currency slips to its lowest level since 2015.

The CurrencyShares Japanese Yen Trust (NYSEArca: FXY), which tracks the yen against the U.S. dollar, fell 1.0% on Monday and declined 5.9% in March.

Meanwhile, the currency-hedged WisdomTree Japan Hedged Equity Fund (NYSEArca: DXJ), which hedges against the negative effects of a depreciating yen currency against the USD, jumped 13.6% since its early March lows. In comparison, the non-hedged iShares MSCI Japan ETF (NYSEArca: EWJ) gained about 6.1% since its lows.

The yen continued to retreat against the U.S. dollar on Monday after the Bank of Japan moved to contain rising bond yields, whereas U.S. Treasury yields have climbed to multi-year highs, reflecting the divergence in monetary tightening cycles between the BOJ and other major central banks, Reuters reports.

The dollar recently hit 122.715 yen, its highest against the Japanese currency since August 2015, and the greenback also enjoyed its best one-day gain against the yen since March 2020.

The yen’s losses in March have already surpassed 7%, and the currency is on pace for its worst monthly and quarterly decline since 2016.

Fueling the depreciation on Monday, the BOJ defended a 0.25% yield cap by offering to purchase unlimited government bonds for the first four days of the week.

“On net, JGBs mostly shook off what was just a repeated gesture to defend the 10-year yield ceiling but the signal toward expanding money supply contributed to yen softness alongside the more dominant Federal Reserve effects on the dollar,” Derek Holt, head of capital markets economics at Scotiabank Economics, told Reuters.

“There is no change in the basic structure that a weaker yen has positive effects on the Japanese economy by pushing up the overall economy and prices,” Bank of Japan Gov. Haruhiko Kuroda said at a parliamentary session on Friday, according to the Wall Street Journal.