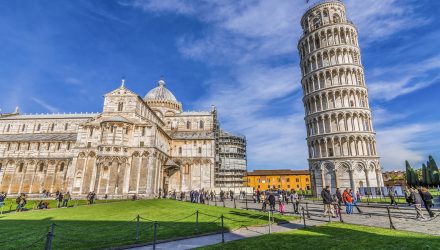 Italy ETF Could Struggle Again in 2019

Amid political volatility and concerns about the pace of economic growth, the iShares MSCI Italy Capped ETF (NYSEArca: EWI), the largest US-listed exchange traded fund dedicated to Italian equities, is down 21.65% this year. That makes EWI one of 2018’s worst-performing single-country developed market ETFs.

Some market observers believe Italian equities face more downside in 2019. Italy is the Eurozone’s third-largest economy behind Germany and France. There are also increasing concerns that Italy is inching toward a recession. Increased uncertainty regarding government efforts to enhance Italy’s fiscal status is weighing on the minds of some investors.

“Italy’s growth slowed sharply in 2018 and we see more downside ahead,” said BlackRock in a recent note. “Political uncertainty has weighed on business and consumer confidence, while the budget proposal and battle with Brussels has raised borrowing costs and tightened financial conditions.”

Italian stocks are volatile relative to French and German equivalents and broader European equity benchmarks as highlighted by a three-year standard deviation of 21% on EWI.

The Italy ETF holds 23 stocks, 29.55% of which hail from the country’s downtrodden financial services sector. Utilities and energy names combine for 39% of EWI’s roster.