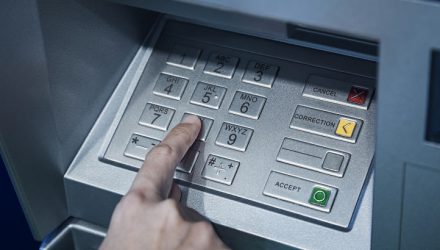 It Could be Time to Buy Bank ETFs

Last week, financial stocks and sector-related exchange traded funds slipped as second-quarter earnings season kicked off for the sector, but some analysts believe it could be time to consider financial services names and ETFs such as the Financial Select Sector SPDR (NYSEArca:XLF), the largest financial sector-related ETF.

Bankers are witnessing diminished demand for big loans out of businesses partly due to uncertainty over policy action on Capitol Hill. In addition, while the Federal Reserve’s rate hikes have helped banks earn more on loans, benefits were partially pared down by declines in long-term rates, with yields on Treasuries falling over the second quarter.

“Despite the decline in share prices of JPMorgan and Citigroup on Friday after they reported earnings, bank stocks could see further upside if the yield curve steepens and inflation picks up, said Mark Tepper, president of Strategic Wealth Partners,” reports CNBC.