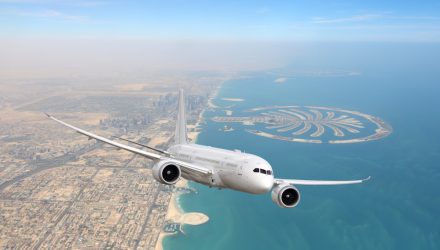 Is the Airline ETF Starting to Look Pricey?

The airline sector-specific exchange traded fund has been on a tear, but the recent run-up may do less with fundamentals and more with a short squeeze that has pushed up valuations.

The U.S. Global Jets ETF (JETS), the lone ETF dedicated to the airline industry, gained another 5.8% on Friday after surging 42.2% over the past month. It is now trading with a Relative Strength Index reading of 76, or what technical investors may consider slightly overbought conditions. Nevertheless, JETS is still down 39.2% year-to-date, despite the recent climb.

Analysts expressed skepticism that the recent big moves reflected anything other than a short squeeze, as traders who previously bet against the airline industry re-bought shares to cover their positions in response to the sudden spike in prices, Barron’s reports.

For example, shares of American Airlines Group (AAL) jumped a record 41% on Thursday after the carrier announced an increase in summer flight schedule as it plans to rebuild domestic capacity to 55% of 2019 levels and international flights to 20%. AAL shares continued to soar Friday, gaining more than 10% in recent trading. Other heavily shorted airline stocks also rallied, including Spirit Airlines (SAVE) and United Airlines Holdings (UAL).

Consequently, Raymond James analyst Savanthi Syth has reduced her rating on American stock to Underperform from Neutral, arguing that shares are now “priced to perfection.”

“AAL’s share price reaction is confounding,” Credit Suisse’s Jose Caiado, who maintained an Underweight rating, said in a note. While the new summer schedule was a sign of improving demand, “it certainly wasn’t incrementally positive to the tune of a 41% move in AAL’s share price.”

Caiado also warned of ongoing risks. For instance, American still holds a $40 billion total debt load, including over $28 billion in long-term debt, and a high-single-digit leverage ratio, based on 2021 estimates, which “the company will need to dig out of.” Furthermore, earnings “will remain negative next year, weighed down by the heavy interest burden.”