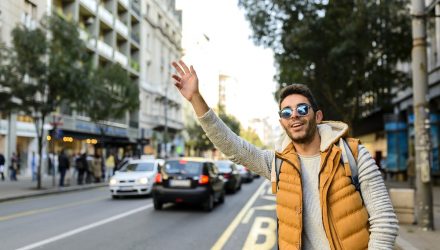 Investors Betting On Uber Earnings To Boost The Behemoth

Before going public earlier this month, Uber had told investors to be prepared for an even more sizable loss in the first quarter. Now, it’s telling them it expects the price-cutting competition that has damaged its profits to ease up soon.

Ride-sharing behemoth Uber released its first-ever earnings report as a public company after Thursday’s closing bell, and some options traders were betting that the stock would rally resolutely.

“So we saw about four times the average daily options volume in Uber today. It traded over 60,000 contracts overall and one of the interesting things we saw: we have an implied move a of little over 7%. Consider Lyft moved about 11% after they reported earnings, their first earnings, and about 16% by the end of the week. Uber is seeing more bullish activity,” according to options guru Mike Khouw on CNBC.

In one such trade, said Khouw, somebody bought a large options position, purchasing 2,500 calls for $43.50 that expire on June 7.

“That’s somebody making a bullish bet that Uber’s going to rally by at least 10% by the end of next week, and that would obviously be targeting the post-IPO highs … of about $45,” Khouw, who is co-founder and chief strategist at Optimize Advisors, said Wednesday on CNBC’s “Options Action.” “It hasn’t touched those levels since.”

The bullish outlook on Uber stands in stark contrast to early investor sentiment, when the ridesharing company closed down 7.62% on its first day of trading at $41.57, after taking the plunge into the shareholder scrutiny pool as a public company in one of the worst weeks for U.S. markets this year.

Well, Wall Street liked what it saw in Uber’s first earnings report. Its stock rallied more than 1% in early trading Friday, and it is still up over 0.5% despite a sea of red dragging the overall market down due to renewed tariff and trade-related fears, this time with Mexico.

Uber CEO Dara Khosrowshahi said he expects Uber and Lyft, at least, will be easing off their ongoing price-slashing battle soon.

“The competition is going to be more healthy,” he said. “It’s going to be based on brand and product and technology, which we think is the right way to compete, versus throwing money at the problem.”

Interestingly, when looking at transportation-focused exchange-traded funds like the SPDR S&P Transportation ETF (NYSEArca: XTN), the overall sector seems to be doing reasonably well, as is up 18.57 percent year-to-date, outpacing the S&P 500’s 15 percent YTD gain.