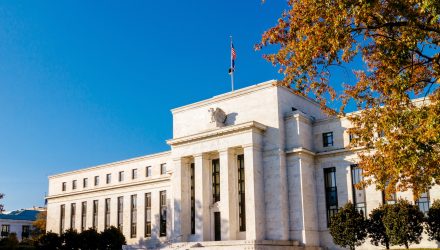 Stocks and index ETFs are continuing their decline on Friday, with the Dow Jones Industrial Average headed for its worst week since January, after St. Louis Federal Reserve President Jim Bullard said the first rate hike could come as soon as next year, sparking fear in investors and markets. The downdraft is a positive for inverse ETF investors, as selloffs in the equities markets represent potential profits for inverse stock investors.

Bullard said on CNBC that it made sense for the central bank to consider becoming more “hawkish” this week, even upping the timeframe for the first rate increase to sometime in 2022.

The news sent further jitters though an already cagey market that slid this week after the Federal Reserve on Wednesday afternoon added two rate hikes to its 2023 forecast and broadened its inflation projection for 2021.

The news has sent ripples through a number of sectors, including energy and industrials, which have both lost over 3% this week so far, and financials and materials, which have tumbled more than 5%.

The ProShares Short S&P 500 (SH) gained almost 1% Friday, and even more throughout the week, while the other major indices plummeted. Another highly leveraged ETF, the Direxion Daily S&P 500 Bear 3X Shares (SPXS) rallied 3% Friday, catalyzed by its triple leverage.

The Fed’s decision spurred a dramatic flattening of the so-called Treasury yield curve, something that is difficult for banks to endure, as bank earnings suffer when the spread between short-term and long-term rates narrows. The Direxion Daily Regional Banks Bull 3X Shares (DPST) tumbled more than 6.25% Friday amid the news.

Fed Chairman Jerome Powell said Wednesday that officials have considering a decrease in bond buying and would eventually begin to curb the asset purchases.

“Investors may be interpreting the Fed’s hawkish tilt Wednesday as a sign that an extended US post-pandemic economic expansion may be a bit harder to achieve in a potentially emerging environment of less accommodative monetary policy,” said Chris Hussey of Goldman Sachs in a note.

Markets have other reasons to exhibit more volatility as well, as Friday happens to be the quarterly “quadruple witching” in which options and futures on indexes and equities expire, an event that often rattles stocks and index ETFs.

Despite the market’s reaction to the Fed’s comments and announcement this week, Bullard tried to point at the positive reasons for changing central bank policy.

For 2021, the committee elevated its projections for core inflation as measured by the personal consumption expenditures price index to 3% from the March estimate of 2.2%. It also increased its median estimate for inflation, including moving food and energy prices to 3.4%, a jump of 1% from the prior projection.

In addition, the committee raised its projections for GDP growth to 7% from 6.5%, which Bullard was also enthusiastic about.

“Overall, it’s very good news,” Bullard said of the economic trajectory during the re-opening. “You love to have an economy growing as fast as this one, you love to have a labor market improving the way this one has improved.”

Like other analysts, Bullard did note that the growth is heralding faster-than-expected inflation, adding that “you could even see some upside risks” to price pressures that by some measures are operating at their highest levels since the early 1980s.

Overall he envisions inflation running at 3% this year and 2.5% in 2022 before drifting back down to the Fed’s 2% target, in-line with some of the hotter estimates from other analysts.

“If that’s what you think is going to happen, then by the time you get to the end of 2022, you’d already have two years of two-and-a-half to 3% inflation,” he said. “To me, that would meet our new framework where we said we’re going to allow inflation to run above target for some time, and from there we could bring inflation down to 2% over the subsequent horizon.”

Finally, he suggested that monetary policy will remain flexible.

“These are things far in the future in an environment where we’ve got a lot of volatility, so it’s not at all clear any of this will pan out the way anybody is talking about. So we’re going to have to go meeting by meeting to see what happens,” he concluded.