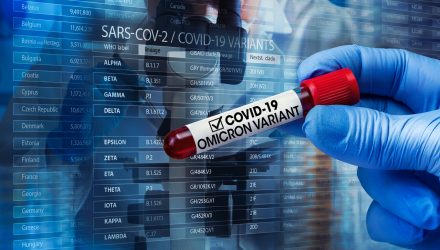 The Dow Jones Industrial Average fell nearly 550 points, dragged down by losses in sectors such as banking and aerospace, while the S&P 500 slipped 1.5% and the technology-focused Nasdaq Composite lost at least 1.6%.

Stock index ETFs followed suit, with the SPDR Dow Jones Industrial Average ETF (DIA), the SPDR S&P 500 ETF Trust (SPY), and the Invesco QQQ Trust (QQQ) all in the red on Monday as analysts ponder whether the traditional Santa Claus rally is likely to appear this year.

The Omicron variant of the coronavirus is ravaging the globe as the winter holiday season rapidly approaches this week. The strain has already been uncovered through testing in almost every state in the U.S. as well as roughly 90 countries around the world, with the tally of cases doubling in 1.5 to 3 days in areas with community transmission, according to information from the World Health Organization (WHO) this weekend.

The news has been sobering for the uber-bullish stock market and has put a damper on reopening stocks and ETFs on Monday. With cruise stocks like Royal Caribbean and airlines such as United Airlines and Southwest slipping, the Defiance Hotel, Airline, and Cruise ETF (CRUZ) and the U.S. Global Jets ETF (JETS) are both off on Monday.

While some investors and analysts are still awaiting a Christmas rally, other analysts warn investors that if certain levels give way, the market could be in for a wild ride, including spiking volatility.

Miller Tabak + Co.’s chief market strategist Matt Maley admonished investors in a note to clients, saying, “As we learned all too well last week, there is still plenty of volatility left in the stock market as we move into the end of the year. Of course, 2021 could act like an ‘old soldier’ and just ‘fade away’…but if the key short-term support/resistance levels are broken, it could still lead to a big move before the end of the year.”

Maley explained that a move above or below certain threshold levels could result in trading algorithms springing into action, which could propel the market further, creating a potential tidal wave effect as volatility ramps up. The VIX, or volatility index, is already up over 8% on Monday, as stocks have fallen.

While downside moves are negative for stocks, they have inverse ETF traders rejoicing.

SPXS offers 3x daily short leverage to the broad-based S&P 500 Index, making it a powerful tool for investors with a bearish short-term outlook for U.S. large-cap stocks. Investors should note that the leverage on SPXS resets on a daily basis, which results in a compounding of returns when held for multiple periods. BGZ can be a powerful tool for sophisticated investors, but should be avoided by those with a low risk tolerance or a buy-and-hold strategy.

The continuing drop in markets “reflecting growing uncertainty surrounding whether the Omicron surge will bring new widespread economic shutdowns, an unexpected shelving of additional fiscal stimulus from President Biden’s Build Back Better plan, and a breach by the S&P 500 index of its 50-day moving average,” said Jim Paulsen, chief investment strategist at the Leuthold Group.

Political news may also be affecting stocks, with conservative Democrat Sen. Joe Manchin stating on Sunday that he won’t champion the Biden administration’s “Build Back Better” plan, likely destroying the chance for the $1.75 trillion social spending and climate policy bill to succeed in its current form, and spurring banks to adjust their forecasts.

Goldman Sachs altered its GDP forecast on the Manchin news, trimming its first quarter 2022 forecast to 2% from 3%, and lowering its second quarter and third quarter growth forecasts.

“In light of Manchin’s comments, the odds have clearly declined and we will remove the assumption from our forecast,” Goldman’s economist Jan Hatzius wrote. “With headline CPI reaching as high as 7% in the next few months in our forecast before it begins to fall, the inflation concerns that Sen. Manchin and others have already expressed are likely to persist, making passage more difficult.”

Stocks have had a difficult time over the last week, with the S&P 500 falling almost 2% as the Nasdaq Composite shed roughly 3% last week alone and investors tossed growth stocks, fearing spiking interest rates. The asset adjustments arrived as the Federal Reserve announced last week that it could push for a more aggressive plan to curtail asset purchases, as well as possibly increase interest rates as much as three times in 2022.

The next few days should bring clarity, however, as bullish investors bet on support levels holding and a Santa Claus Rally to end the year.

“On the one hand, corners of the market are oversold,” Adam Crisafulli, founder of Vital Knowledge, said in a note. However, “the aggressive ‘buy the dip’ mentality, which proved so profitable for the last 1.5+ years, especially in the high-multiple corners of the market, was underwritten by a tidal wave of stimulus that is now receding.”