You are at:Home»Currency-Hedged»International ETFs for Foreign Exposure if Dollar Strengthens 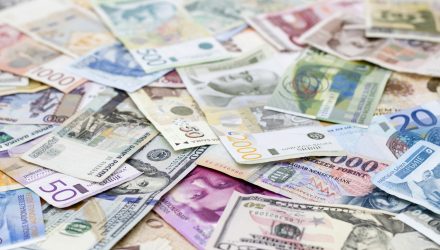 Many investors have diversified into international markets in search of greater opportunities but they will have to consider currency risks, especially with the Federal Reserve set to tighten its monetary policy. Nevertheless, ETFs can still capture global exposure and hedge foreign exchange risks with currency-hedged strategies.

“We believe a modestly higher USD ahead supports the case for favoring eurozone and Japanese equities,” BlackRock strategists, led by Richard Turnill, said in a research note. “Within currencies, we favor the USD to the euro and yen amid monetary policy divergence.”

The U.S. dollar is expected to strengthen against its foreign counterparts as the Fed normalizes interest rates ahead of its developed market peers and the U.S. economic growth exhibits upside potential.

However, U.S. dollar gains may be moderate since Fed rate hikes will likely come in slowly when compared to past cycles due to the relatively depressed U.S. inflation levels. According to BlackRock, U.S. core inflation is expected to return to just 2% in six months’ time, which falls in line with the Fed’s target levels.

A stronger U.S. dollar or a weaker Japanese yen and Eurozone euro currency will also be beneficial for the respective foreign economies as well.

“We see a stronger USD versus the euro and yen supporting equities in the eurozone and Japan, given these stock markets’ export-oriented nature,” according to BlackRock.