You are at:Home»Equity ETFs»Interesting Activity in Retail ETF Ahead of Earnings 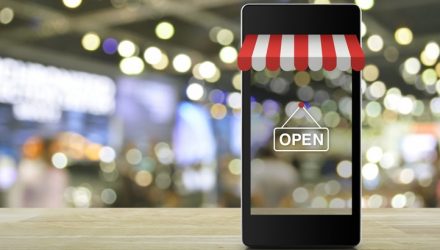 Interesting Activity in Retail ETF Ahead of Earnings

The already challenged SPDR S&P Retail ETF (NYSEArca: XRT), the largest retail-related exchange traded fund, faces potential problems over the coming weeks amid a spate of earnings reports from the retail sector. That is likely why the benchmark retail ETF is seeing some interesting options activity.

Adding to the concern for an ETF such as XRT is the fact that the broader consumer discretionary sector, which includes retail, is in the middle of its seasonally strong period. In fact, there are another six or seven weeks remaining in the strongest period of the year for the discretionary sector, but XRT is languishing. XRT is down 6.2% year-to-date.

“XRT options traders are getting in on the action, too, with nearly 22,000 contracts traded — more than two times the average intraday rate, and volume pacing in the 82nd annual percentile,” reports Schaeffer’s Investment Research. “Most active is the weekly 9/1 41-strike put, due to a 6,100-contract block that was likely bought to open. This activity was tied to stock, though, suggesting a trader may be initiating an options hedge ahead of an onslaught of retail earnings due over the next few weeks.”

On-Demand Webcast: Emerging Market ETFs Are Too Big to Ignore

“More broadly, the trend in XRT’s options pits has been toward long puts in recent weeks. At the International Securities Exchange (ISE), Chicago Board Options Exchange (CBOE), and NASDAQ OMX PHLX (PHLX), speculative players have bought to open 22,168 puts on the retail fund in the last 10 days, versus 3,090 calls. The resultant put/call volume ratio of 8.53 ranks 6 percentage points from a 52-week peak, pointing to elevated demand for bearish bets over bullish,” according to Schaeffer’s.

As the research firm notes, there is increased activity in the September $37 puts on XRT. The ETF currently resides over $41 and has not traded below $37 in more than four years.