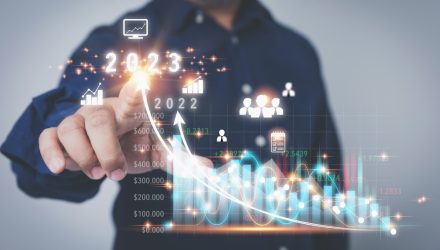 BondBloxx’s Joanna Gallegos: “The Table Is Set for Fixed Income” for 2023

After a tumultuous year for stock and bond markets, BondBloxx Investment Management co-founder Joanna Gallegos thinks “the table is set for fixed income” for 2023. Appearing on TD Ameritrade’s “Trading 360” with Nicole Petallides before the start of the new year, Gallegos said there are plenty of opportunities to be found in the fixed income market in the new year.

“We’re very positive on the way that fixed income has changed over this year,” she said. “We have gone through such a significant hike in rates, that there’s a degree that the table is set for fixed income.”

While Gallegos expects more volatility in equity markets for 2023, “income is back in fixed income, and investors have a lot of opportunity right now.” In Q4, BondBloxx saw investors move their cash to treasuries. So, BondBloxx saw a lot of growth in its products in the treasuries space, particularly the BondBloxx Bloomberg Six Month Target Duration US Treasury ETF (NYSE Arca: XHLF).

“It seemed to be the sweet spot for what people wanted to do with their cash and start earning money on their cash,” Gallegos said.

XHLF is one of eight target-duration U.S. Treasury ETFs that BondBloxx launched in September. These funds track indexes that achieve target durations using U.S. Treasury securities, instead of specific maturities or maturity ranges. The indexes, developed by Bloomberg Index Services, include duration-constrained subsets of U.S. Treasury bonds with more than $300 billion outstanding.

“We believe that the market’s been incredibly underserved in terms of precise exposures and there aren’t enough tools for investors to really take action in fixed income markets,” Gallegos said.