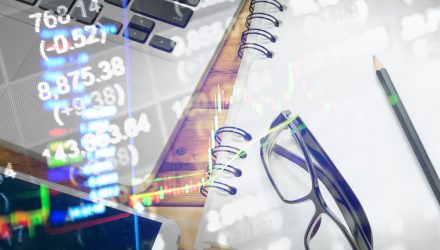 Investors Turned to High Yield in Advance of Fed’s Decision

Many investors became bullish on the prospect that the Federal Reserve would ease up on its aggressive interest rate hikes (spoiler alert: so far, it has not). As a result, they became more risk-on with their investments.

So, prior to the Fed announcing its decision on Wednesday to raise interest rates by another 75 basis points, ETF investors put more money into high-yield fixed income funds. For example, data from Bloomberg show that investors put nearly $1 billion into the SPDR Bloomberg High Yield Bond ETF (JNK) on Friday, the fund’s biggest daily inflow since 2007.

“Risk assets of all stripes have been climbing as optimism builds around the Fed dialing back the pace of rate hikes after it delivers an expected fourth-straight, 75-basis-point rate increase Wednesday,” according to Bloomberg. “The renewed appetite for risk has boosted equities and sent billions into credit ETFs despite lackluster corporate earnings.”

The Fed continued its aggressive campaign to fight inflation by raising rates by three-quarters of a point for the fourth time in a row on Wednesday. However, the U.S. central bank said in its policy statement that officials were aware that interest rate moves take time to fully work, signaling that it could slow rate hikes soon.

“Our conversations with investors have reinforced what we already knew – there is significant demand for more targeted fixed income products,” said Kelly. “Our initial product suites aim to create a full toolkit for high-yield investors looking to implement their specific views on the market, and we anticipate extending this approach to other fixed income asset classes.”