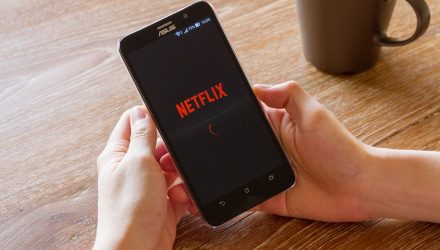 Will Netflix And Chill Soon Be A Thing Of The Past?

Ian Young September 23, 2019
Back in July Netflix fell short of its growth target by more than two million subscriptions. And for the first time in eight years, it reported a subscriber loss in the US. The stock plunged more than 10% on the news. Then Netflix (NFLX) shares dropped more than 2% earlier this month after Apple (AAPL) revealed that its subscription TV service will launch in November, will be much cheaper than Netflix, and will be free for a year for customers who buy a Mac, iPhone or Apple TV. Now investors are wondering if the company is in peril.
The streaming space has become increasingly competitive of late, with Disney and Apple joining the fray. While Netflix’s most popular plan is currently available for $12.99 a month, Disney+ is set to launch on November 12th for $6.99 a month. Disney will also offer its own bundle with ad-supported Hulu and sports streaming service, ESPN+, for $12.99 a month.
“Well I mean I think the valuations have come down because of all this new competition right? You got Disney plus. But at the end of the day, it’s all, we don’t think that streaming is one company take all kind of market. We think you can have several winners exist,” said Mark Tepper of Strategic Wealth Partners on CNBC.

Looking At The Split

Experts on split on how the streaming media giant will fare moving forward.
“A lot of people are gonna sign up for Disney plus and Netflix, and I think it all boils down to the quality of the content. Netflix has some engaging content, right? Yes, streaming is a trend that’s going to continue to play out, but binge-watching, in my opinion, is the more important trend. That’s the addictive trend, and that’s what Netflix brings to the table. Is that addictive content. People want to sit in front of their TVs, and watch it over and over and over again,” Tepper added.
Growth has been a driver for Netflix, and with poor earnings investors become skittish.
“It’s really on revenue growth expectations. This is a company where it was trading at seven times revenue, but all the sudden you have a 40% missed in the quarter, and then people are looking at maybe instead of 30% growth on top line, you could be looking at high teens,” said Bernie McTernan, analyst at Rosenblatt Securities.
McTernan acknowledged the massive price increase Netflix recently instituted but doubts anything of that magnitude is coming down the pipeline anytime soon.
Related: Apple Streaming Media Rattles Netflix
“We definitely think they’re going to take a pause near term in any massive price increase. The price increase they instituted this year was the greatest they’ve ever had. I think we are a long ways away from them doing such a massive price increase again but with global subscriber growth slowing, pricing is going to matter more and more. So you should see the mid-single-digit price increases, instead of like a 20% rate increases they took this year,” McTernan added.
Despite its recent hit, for those investors looking to take part in Netflix’s streaming media growth, the AdvisorShares New Tech and Media ETF (FNG) or the Invesco NASDAQ Internet ETF (PNQI) are two ETFs to look into.
For more market trends, visit ETF Trends.