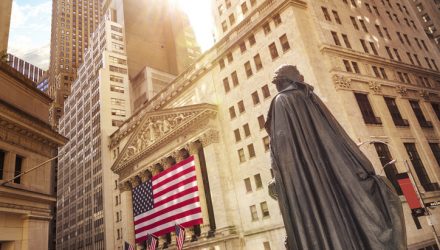 U.S. Stock ETFs Try to Pick Up the Pieces

U.S. markets and stock ETFs strengthened Wednesday with no major economic reports scheduled as the summer wraps up and investors wait on more data updates next week.

The equity markets tried to pare back some of the losses Tuesday after a deepening U.S Treasury yield curve inversion fueled greater fears of an impending economic recession.

“It’s the last real vacation week of the year in terms of summer so there are not a lot people around. You are also not seeing any new reasons in the overnight for people to sell the market,” Peter Kenny, founder of Kenny’s Commentary LLC and Strategic Board Solutions LLC, told Reuters.

Investors were also waiting on updated economic data with the monthly jobs report and manufacturing data scheduled for next week, which could provide further hints on where the Federal Reserve stands on monetary policy.

Further adding on to the risk-on attitude, a string of positive earnings numbers bolstered the stock market, such as Hewlett Packard Enterprise posting stronger-than-expected earnings late Tuesday and Tiffany revealed earnings that were better than previously feared.

International uncertainty, though, were heightened after U.K. Prime Minister Boris Johnson moved to shut down Parliament for several weeks ahead of the U.K.’s scheduled departure from the European Union on October 31, the Wall Street Journal reports.

Market observers warned Johnson’s decision would make it harder for rebel lawmakers to block a no-deal Brexit, which could disrupt the normal flow of trade and people between the U.K. and the rest of Europe and pressure economic growth.