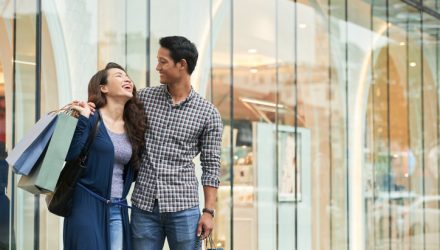 The Commerce Department revealed retail sales data that surpassed analyst expectations as consumers, who account for about 70% of the U.S. economy, increased spending across the board in July, Reuters reports.

“Consumer strength has a lot to do with the low unemployment rate and historically low interest rates,” Matthew Keator, managing partner in the Keator Group, told Reuters. “Money is cheap and people are working.”

The upbeat consumer data helped mollify the markets, which struggled mid-Thursday after a drop in Treasury yields fueled fears of a pending recession. The markets have been paying attention to the recent reversion of the yield curve where the yields on benchmark 10-year Treasuries dipped below those of 2-year Treasuries, which has historically preceded a recession.

“We’re still far away from slipping into a recession that could cause the consumer to retract spending and accelerate a path of economic slowing,” Terry Sandven, chief equity strategist at U.S. Bank Wealth Management, told the Wall Street Journal. “Inflation isn’t problematic, interest rates are low and earnings are growing at a moderate pace, so the backdrop is still favorable for stocks to trend higher.”

Meanwhile, trade continued to keep a cap on market gains. China vowed to counter the latest round of tariffs on Chinese imports and called the U.S. to meet it half way while President Donald Trump maintained a hard line stance that any deal had to be made “on our terms.” The protracted trade war has shown few signs of a clear resolution any time soon.

“(China has) a long history of looking at things in terms of decades, not election cycles,” Keator added. “I’m not surprised that China’s playing the long game.”