You are at:Home»Innovative ETFs Channel»U.S. Stock ETFs Flat as Earnings Season Kicks Off 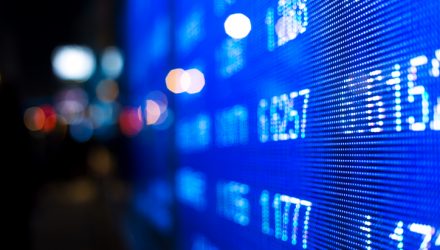 U.S. markets and stock ETFs muddled along on Monday as investors focused their attention on what could be a weak second-quarter earnings season.

This week will kick start the second-quarter earnings season, with the country’s biggest banks reporting results. Analysts have anticipated S&P 500 companies to post a roughly 3% decline in profits year-over-year to mark their weakest quarterly performance since 2016, the Wall Street Journal reports.

Citigroup (NYSE: C) helped kick off the earnings season this week, revealing both profits and revenue that beat expectations but delivering mixed results for its trading unit.

Meanwhile, Asian markets were also mixed after data revealed Chinese economic activity slowed to its weakest pace since 1992, fueling bets that Beijing would introduce stimulus measures to prop up its economy. China’s gross domestic product in the second quarter slowed to 6.2%.

“The GDP figures matched market expectations to the dot,” Carl Weinberg, chief international economist at High Frequency Economics, said in a note. “For serious China watchers, the GDP headline is not very important. It is a backward looking indicator…the surge in monthly data for June is what has our attention.”

President Donald Trump argued that the China slowdown was an indication that the White House’s hard line approach to trade is working and could lead to more favorable trading terms once a deal is reached.