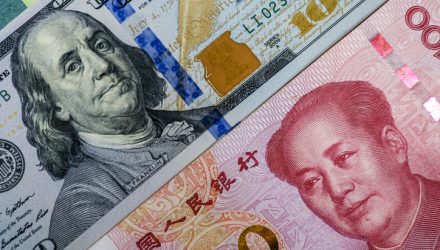 U.S. markets and stock ETFs pared earlier losses but still ended Tuesday in the red after President Donald Trump stated there were difficulties in the ongoing trade talks with China, fueling the ongoing risk-off attitude.

Trump tweeted early Tuesday that there were “no signs” China was showing any signs to forward trade negotiations after remaining silent on U.S. agricultural goods, the Wall Street Journal reports.

“That is the problem with China, they just don’t come through,” Trump added.

Chinese and U.S. negotiators will talk trade this week in Shanghai. The protracted trade war and lingering uncertainty over talks have weighed on the U.S. economic outlook in recent months, pressuring various sectors like manufacturing that have significant exposure to trade.

“We could see a situation arise where additional tariffs are forthcoming as President Trump tries to ratchet up the pressure on China,” Michael Stritch, chief investment officer of BMO Wealth Management, the WSJ.

Trump has also warned China against trying to push off trade negotiations in case a new presidential candidate wins the upcoming election.

“The problem with them waiting … is that if & when I win, the deal that they get will be much tougher than what we are negotiating now…or no deal at all,” Trump said in a post on Twitter.

Softening the blow to markets, the Federal Reserve is widely expected to announce its first interest rate cut in a decade on Wednesday. The markets will be closely watching comments from Federal Reserve Chairman Jerome Powell on Wednesday on how much the central bank could continue to support the economy.

“The Fed has a very strong rationale for cutting interest rates, that is to stimulate growth and inflation, but policymakers have to resort to justifications to keep the expansion going,” Tony Roth, chief investment officer at Wilmington Trust, told Reuters.