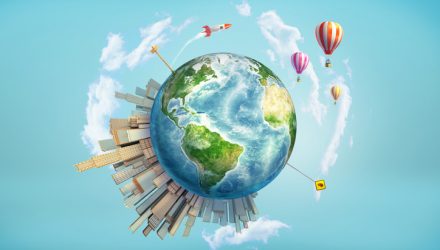 U.S. Stock ETFs on Pace for Another Record End

U.S. markets and stock ETFs climbed toward new highs for the seventh consecutive session on Friday as dissipating trade tensions and signs of an improving economy fueled the rally.

The markets have been in rally mode as the U.S. and China agreed to an initial trade truce and improving economic reports in both countries also eased concerns over a global slowdown, the Wall Street Journal reports.

U.S. President Donald Trump also tweeted on Friday he “Had a very good talk” with Chinese President Xi Jinping about a trade deal, and Treasury Secretary Steven Mnuchin previously stated the treaty would be signed in early January, Reuters reports.

“What investors like is that we seem very, very close to signing a phase one deal,” Michael Geraghty, equity strategist at Cornerstone Capital Group, told Reuters. “The details will be important and interesting, but I think for investors, what’s important right now is that finally China and the U.S. seem to be on the same page.”

Healthy economic data has also kept the markets pushing higher. Consumer spending, a major focus for investors as the key to the U.S. economy, was up 0.4% in November, adding to a number of upbeat data points that assuaged recession fears.

“Nothing gets people back in like a rising market,” Slimmon told the WSJ. “The fear of missing out is alive and well.”

Overseas markets were also joining in, with European markets experiencing improved confidence after lawmakers approved Prime Minister Boris Johnson’s Brexit bill. A clear path to Brexit cleared an important hurdle and paved the way for the U.K. to exit from the European Union by the end of January.

“People will be watching for any clue on how this will play out beyond Jan. 31,” Kit Juckes, a macro strategist at Société Générale, told the WSJ. “What does this threat of proposed law, banning an extension to transition period, what will that really mean and really rule out?”