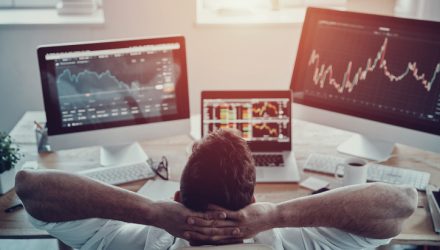 U.S. markets and stock ETFs slipped Tuesday as another round of safe-haven buying depressed Treasury yields and dragged on financials.

Investors remained wary of the U.S.-China trade conflict and how the Federal Reserve will proceed with monetary policies, shifting over to bonds and pushing yields lower, the Wall Street Journal reports.

U.S. yields were also falling on rising bets of further interest rate cuts, along with concerns in Europe where Italy and Britain’s protracted exit from the European Union added to risk-off selling.

Observers noted that the selling on Tuesday wasn’t abnormal after major benchmarks traded positively over the previous three sessions. Market watchers are now looking for new catalysts that would provided a better guide on the general direction equities will take ahead.

There’s “fatigue” at the moment, Gregory Perdon, co-chief investment officer at Arbuthnot Latham told the WSJ, adding that the market is likely in “a sideways summer of trading activity.”

“Markets have been extremely strong over the past few days, so there is a little bit of profit taking,” Gary Bradshaw, portfolio manager with Hodges Funds, told Reuters.

Looking ahead, investors will be watching out for the minutes from the Federal Reserve’s latest meeting on Wednesday, along with comments from Chairman Jerome Powell at the economic symposium in Jackson Hole, Wyoming on Friday.