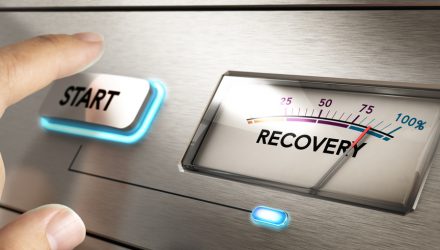 U.S. markets and stock ETFs managed to eke out positive gains Thursday on fresh data revealing another rise in jobless claims and on growing concerns over a poor first-quarter earnings season.

Markets slipped earlier in the day after Labor Department data revealed over 22 million Americans have filed for unemployment benefits since mid-March, the Wall Street Journal reports.

The weakened confidence was further exacerbated by other reports showing new-home construction slumping in the spring period that is traditionally strong for the housing market, which fueled fears that the U.S. economy is under increasing strain as a result of the coronavirus pandemic.

“The unemployment rate will shoot up to double digits, but we also know that there are stimulus checks,” Salman Ahmed, chief investment strategist at Lombard Odier Investment Managers, told the WSJ.

Analysts warned that until there is more clarity on how much the pandemic will ultimately weigh on economic activity, markets will likely remain volatile.

“What the market cannot price in perfectly is when the economy re-opens, what its nuances will look like and what its impact will be on corporate profits one quarter, two quarters and a year away,” David Bahnsen, chief investment officer at Bahnsen Group, told Reuters.

Looking at this earnings season, analysts warned that S&P 500 company earnings could fall 12.8% in the first quarter, with U.S. economic growth expected to have contracted at its fastest pace since World War Two.

President Donald Trump will also announce “new guidelines” for re-opening the economy after a widespread lockdown that has kept many indoors and stalled many business segments. Some observers are hopeful that the markets will stage a rebound once lockdown measures are rolled back as economic activity resumes.

“We’re looking for a 20% decline in earnings for the S&P this year, but we’re going to see a snapback next year,” especially once U.S. consumer activity recovers, Patrick Spencer, vice chairman of equities at Baird, told the WSJ. “We’re at the first stages of a major rotation into stocks.”