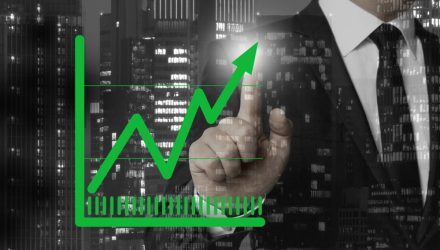 U.S. Stock ETFs Push Toward Records as Investors Look to the Fed

U.S. markets and stock exchange traded funds climbed Wednesday, with the Dow Jones Industrial Average closing at a record, on rising expectations that the Federal Reserve would shift to a looser monetary policy in response to weakening economic data.

The stock markets have been strengthening since last weekend’s trade war truce between the U.S. and China that helped ease market concerns over the prolonged trade tiff between the world’s two biggest economies. Both sides agreed to put off additional tariffs indefinitely as Washington and Beijing renew trade talks.

“With the overhang of further tariffs on Chinese imports paused and the chances of a rate cut from the Fed getting higher, more investors are getting comfortable to invest bigger in equities,” Shawn Gibson, chief investment officer at asset management firm Liquid Strategies, told Reuters.

Investors are now shifting their focus back on the Federal Reserve and its interest rate policy outlook for the year. Many anticipated the Fed to cut rates at one of its upcoming meets in response to slowing growth concerns.

Analysts highlighted the slowing U.S. factory activity and a pullback in hiring activity as supporting factors to a potential rate cut out of the Fed, The Wall Street Journal reports.

According to the latest ADP National Employment Report, private employers added 102,000 jobs to their payrolls in June, compared to expectations of 140,000. The markets were also waiting on the June jobs report, which is due Friday after the July 4 holiday.

“With the modestly positive agreement to restart trade negotiations between the U.S. and China, the bullish narrative now pivots to the Fed meeting at the end of July, when it is overwhelmingly expected to lower the overnight rate by a quarter point,” Ameriprise Chief Market Strategist David Joy told the WSJ.