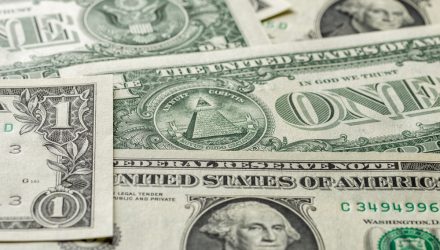 U.S. dollar currency-related exchange traded funds have been on a tear, with the greenback at a one-year high against the Japanese yen and on pace for its best quarter since 2018.

The Invesco DB US Dollar Bullish (NYSEArca: UUP) has advanced roughly 4.0% over the past three months. UUP tracks the price movement of the U.S. dollar against a basket of currencies, including the euro, Japanese yen, British pound, Canadian dollar, Swedish krona, and Swiss franc.

Meanwhile, the U.S. dollar index, a gauge that tracks the value of the USD against six major currencies, was on pace to post its best quarterly gain since June 2018.

The USD has strengthened to multi-month highs against major global currencies as investors raised bets that the recent fiscal stimulus and vaccination rollout will help the United States lead the global post-pandemic recovery in 2021, Reuters reports.

“While ADP isn’t a reliable gauge of how nonfarm payrolls might fare, it paints an improving picture of the labor market,” Joe Manimbo, senior market analyst at Western Union Business Solutions, said in a research note.

Looking ahead, economists are anticipating U.S. non-farm payrolls of 647,000 to be announced April 2.

“Given markets’ lofty expectations for March hiring, seen up by 650,000, the dollar could fall prey to the buy the rumor of good news and sell on the fact,” Manimbo added.

Additionally, the USD has found support from the surge in U.S. bond yields, which make the U.S. currency more attractive as an investment for foreign investments.

“With U.S. Treasuries meaningfully under pressure yesterday, the environment is clearly supportive for the U.S. dollar, particularly as Europe continues to battle with a third Covid wave,” ING’s global head of markets, Chris Turner, said in a note to clients.