You are at:Home»Innovative ETFs Channel»U.S. Dollar ETF Has Enjoyed an Impressive Week 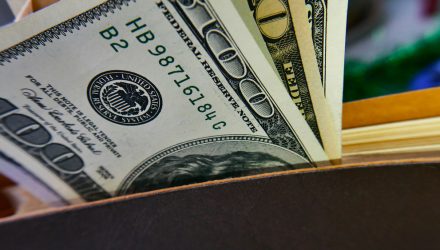 The U.S. dollar and a currency-related exchange traded fund jumped to their highest levels in months after the Federal Reserve signaled it is taking a more hawkish stance on its monetary policy.

The Invesco DB US Dollar Bullish (NYSEArca: UUP) rose 0.3% on Friday after advancing 2.1% over the past week. UUP tracks the price movement of the U.S. dollar against a basket of currencies, including the euro, Japanese yen, British pound, Canadian dollar, Swedish krona, and Swiss franc.

The greenback was on pace for its biggest two-day percentage gain against a basket of major foreign currencies in 15 months on Thursday, and was hovering around its highest level since mid-April after the Fed outlined its first projected rate hike into 2023 to combat rising inflation, Reuters reports.

Some even believe that the U.S. dollar may have more room to run as bearish traders unwind positions. Betting against the USD has been a popular trade for months as short sellers gained confidence in the Fed’s insistence that it would maintain its ultra-dovish stance despite the spike in inflation, which helped drag the currency to a near three-year low.

However, the Fed’s new hawkish outlook with a sooner-than-expected rate rise helped bolster the attractiveness of dollar-denominated assets for foreign investors. Both Goldman Sachs and Deutsche Bank recommended investors reduce bets on the euro rising against the dollar after the Fed meeting.

The unwinding bearish plays could help the greenback maintain its momentum. Net bets against the USD were at $18 billion last week, a three-month high, according to the CFTC.

“In the coming weeks and months, the short-dollar thesis that has been so dominant and popular for much of the past year will be severely tested,” Stephen Jen, portfolio manager at hedge fund Eurizon SLJ, told Reuters.