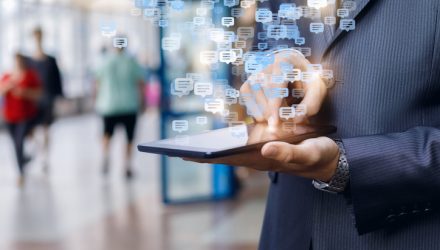 Twitter (NasdaqGS: TWTR) shares plunged the most in over a year after a disappointing quarterly, dragging on communication services sector-related ETFs.

Twitter shares plummeted 20.8% Thursday after revealing results that missed estimates and revealed privacy issues over its advertising businesses will continue to weigh on its business. TWTR makes up 11.9% of SOCL’s underlying holdings and 3.9% of XLC.

The social media company said third quarter sales rose 8.6% to $823.7 million, compared to expectations of $876 million, Bloomberg reports. Additionally, the company projected sales in the period ending December to be $940 million to $1.01 million, compared to analysts’ estimates of $1.06 billion.

The company attributed the short fall to “greater-than-expected advertising seasonality” in July and August, along with a reference to “revenue product issues” that cut sales by 3 or more percentage points.

Chief Financial Officer Ned Segal blamed the miss partly on “bugs” in the way Twitter targeted ads and shared personal user information. For example, Twitter previously collected device information from people and used it to target them with advertising without permission. Twitter also shared users interactions on mobile apps with some advertisers without permission. The actions were believed to be a way to help advertisers measure whether their ads were working or not.

Related: Look to Quality Dividend ETFs to Smooth Out a Bumpy Ride

The practice has since been stopped in early August, and it made Twitter’s ad measurement weaker. In other words, some advertisers pulled spending, Segal added.

Nevertheless, user growth was still strong for the company, which has historically struggled to keep its audience. The company saw 6 million new daily active users to 145 million in the third quarter, or a 17% jump year-over-year and a 4% gain quarter-over-quarter.

“Despite its challenges, this quarter validates our strategy of investing to drive long-term growth,” Segal said in a statement. “More work remains to deliver improved revenue products. We’ll continue to prioritize our ad products along with health and our investments to drive ongoing growth” in monetizing daily active users.