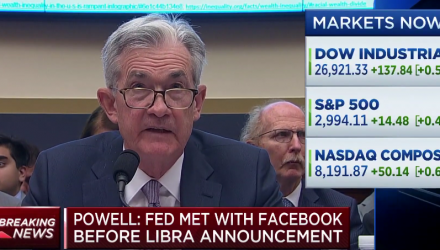 Trump and Fed Chair in Agreement on Facebook’s Cryptocurrency

While it seems U.S. President Donald Trump and the Federal Reserve are at odds when it comes to interest rate policy, it appears they are in agreement when it comes to cryptocurrencies. Fed chairman Jerome Powell said after his testimony to Congress recently that crptocurrencies, Facebook’s Libra project in particular, is a cause for concern.

In similar fashion, President Trump took to Twitter to express his distaste for cryptocurrencies.

The latest comments by the president and Fed chair come after French Finance Minister Bruno Le Maire said during a radio interview that Facebook’s latest foray into digital currencies “must not happen.”