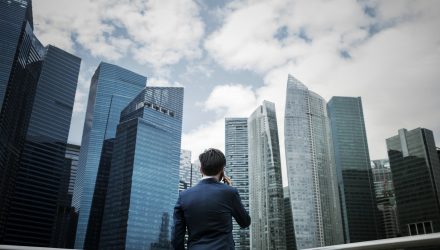 Trade Deal or Not, Here Are 3 China Tech ETFs to Consider

U.S.-China trade negotiations may appear to be at a standstill, but that doesn’t mean investors should sour their taste for Chinese equities, according to Lewis Kaufman, a portfolio manager at Artisan Partners.

“Regardless of what ultimately happens with the China trade tensions, there is a robustness to China that doesn’t exist anywhere else in the emerging markets,” said Kaufman. “We want to be leveraged to that.”

“There’s an ecosystem for capital formation. It’s very difficult to access domestic demand through the vehicles we would wish to use in so many emerging-market countries,” Kaufman added. “But in China, if I want to buy into a health-care company, I have 10 choices. If I want to buy into an internet company, there are lots of choices.”
U.S. President Donald Trump and Chinese President Xi Jinping recently met at the G-20 summit in Japan, agreeing to hold back on further tariffs until the two largest economies can iron out a trade deal.
The latest trade war news may have the capital markets inhaling a healthy dose of fresh air for the long-term. More specifically, the optimism from the latest U.S.-China ceasefire could last for at least a couple of months, according to J.P. Morgan.
“I think for now, markets have taken on a more optimistic and upbeat tone at least since the weekend. And I think this optimistic tone will continue for the next couple months,” said Jing Ulrich, managing director and vice chair of global banking and Asia Pacific at J.P. Morgan Chase.

How can investors get a piece of this optimism for Chinese equities? Here are three China tech ETFs to consider:

“In China, we’ve got the trade tensions. We’ll see how that evolves. There’s certainly a possibility we’re in a deeper, more drawn out trade tension. There’s also a possibility that gets resolved, although I think that probability is falling,” Kaufman said. “But my point is there is a robustness to the Chinese economy and equity story that really doesn’t exist anywhere else in the emerging markets.”