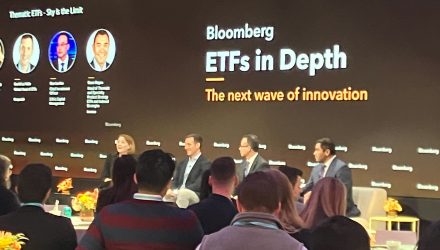 Thematic ETFs – Sky is the Limit

Thematics have garnered a huge amount of attention and an increasing market share. Reyna observed, “there’s a notion thematic are opportunistic – which they can be, but a lot of investors are making strategic allocations to this space.” Thematics are a path toward innovation and disruption, according to Reyna. “These are spaces investors want to talk about.” He also noted that government spending is driving many themes, as investors seek to find a way to profit from areas and themes that the government is investing in.

Thematic products were once viewed as flash-in-the-pan products, according to La Valle. “The idea that these were built for retail and institutions weren’t paying attention to them is a story of the past,” he said. He pivoted to crypto, which he sees as a disruptive product, likening investment in the space now to investing in the infrastructure of the internet before people were even thinking about such a thing.

Reyna added that nascent concepts take time to crystallize, comparing crypto to clean energy, which saw investment in the aughts before collapsing in the financial crisis and not recovering as an idea until today, with funds like the Invesco WIlderHill Clean Energy ETF (PBW) taking in over $1.3 billion in flows in the last 5 years.

“Ultimately investing is about forgoing present consumption for future consumption,” Lavine said. He took a moment to defend NFTs and digital assets, which he believes will be used for digital consumption in the future.

“It’s no secret crypto is going through a tremendous downturn,” La Valle conceded, but he sees crypto as a small-cap tech play that gives you access to a disruptive tech that could cut into a wide variety of sectors. “That makes it thematic in nature.”

According to Reyna, “being a first mover is very important,” he noted, especially given the number of products that launch around given themes.

Speaking to product crowding, La Valle said, “the market is going to sort this out,” and noted that closures play a vital role here and aren’t necessarily a sign of failure. He pointed out that indexes are also innovating and changing the way investors can get exposure to themes. The Global X Lithium and Battery Tech ETF (LIT) and the ProShares S&P Global Core Battery Matels ETF (ION) might seem similar at first blush, but represent very different viewpoints and exposures around the same theme.

Looking to 2023, La Valle said, “thematics are here to stay and they are an opportunity to launch a product that has broad retail and institutional appeal.”