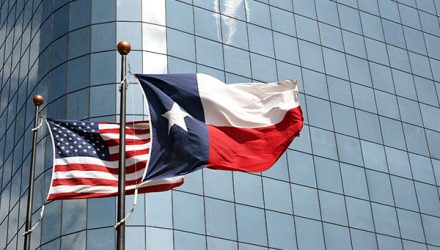 Texas Leads the Nation in Reopening Its Economy

Friday was “reopening” day for Texas, home state of U.S. Global Investors. Restaurants, retail stores and malls can now open their doors to customers again, so long as occupancy is kept at 25 percent of what it normally would be. In metropolitan areas such as San Antonio, social distancing and masks are still required in public places.

If everything works out well and we don’t see a massive spike in new COVID-19 cases, then bars, salons, barbershops, gyms and more could be next to reopen later this month.

This is all very positive for the state and local economies, especially San Antonio’s. Hundreds of thousands of people work in the city’s important travel and hospitality industry, which contributes some $15 billion to the San Antonio economy every year. Many of you reading this may have visited the River City to stroll down the beautiful River Walk, take in the historic San Antonio Missions—named a UNESCO World Heritage site—or enjoy the Battle of Flowers Parade during Fiesta.

And for those who haven’t yet, I highly recommend you make it a point to visit San Antonio—once you feel that it’s safe, of course.

Coincidentally, the Transportation Security Administration (TSA) reported a big jump in the number of daily commercial air passengers last week. From April 29 to 30, the number of people the agency screened in the U.S. rose by 35,000, or 30 percent, to 154,695 people. That’s still 2.3 million below where we were a year earlier, but I see the increase as an encouraging sign that we’re past the bottom.

The experience of commercial air travel has not returned to “normal,” of course. Most major airlines, including American, Delta and United, now require masks be worn, even though the average number of passengers on domestic flights stands at only 17.

Air travelers have had to adapt to change before. The 9/11 terrorist attacks gave us TSA and lengthened wait times to board planes—though that time has been dramatically reduced thanks to PreCheck. We’re now accustomed to taking off our shoes and leaving our cans of shaving cream at home.

It’s possible that, even in a post-COVID-19 world, all passengers will need to undergo a health screening of some kind before boarding. That’s the plan, at least, for Etihad Airways, a United Arab Emirates (UAE) carrier, which has partnered with Australian tech firm Elenium Automation to develop technology that can monitor passengers’ temperature, heart rate and respiratory rate. If any irregularities are detected, staff will be alerted to assess the situation.

What if there was a way to “zap” the virus before it had a chance to infect someone? A company here in San Antonio believes it may have figured out a way to do just that. Xenex Disinfection Services announced last week that it has developed a robot that can shoot out ultraviolent pulses “more intense than sunlight,” according to a press release. In under two minutes, these pulses can “kill” the SARS-Cov-2 coronavirus, responsible for causing COVID-19, on public surfaces such as walls, doors and tables.

State reopenings are happening at a time when newly released data show that the coronavirus is not nearly as lethal to most people as initially thought. Please know that I don’t mean to downplay the risk. It’s highly infectious, and we should all remain smart and cautious as we await a vaccine and better treatments.

Those in high-risk categories—65 and over, underlying conditions—should be extra cautious.

Be that as it may, I believe Texas and other states are making the right choice by safely reopening certain businesses so working-age people can return to work and bring back a level of normalcy to their lives. The truth is that younger, healthier people are statistically far less likely to run into serious problems should they happen to contract the disease.

Below is a chart illustrating coronavirus data provided by the Massachusetts Department of Public Health. What it shows is that the likelihood of dying from COVID-19 was greatly dependent on the person’s age. People 80 and over were most at risk, those between 70 and 79 less so, those between 60 and 69 even less so, and so on. Again, this data includes cases just in Massachusetts, but I believe it’s reflective of the U.S. as a whole.

The average age of people who died in confirmed COVID-19 cases, in fact, was 82.

Meanwhile, the coronavirus contributed to the deaths of “only” 40 young people aged 49 and below. People in this age bracket represented just 1.1 percent of total deaths in Massachusetts related to the virus. Even one death is one too many, but it’s important to keep things in perspective.

Looking Ahead to Second-Quarter Earnings

A little over half of S&P 500 companies have now reported first-quarter earnings. Although there have been some exceptions (Tesla, Clorox, and Colgate-Palmolive among them), earnings beats are down, as expected. FactSet estimates that, once all companies report, earnings may have fallen 13.7 percent compared to the same quarter a year earlier, which would be the largest such decline since the third quarter of 2009. What’s more, as many as 30 S&P 500 companies have withdrawn guidance for fiscal year 2020.

The second quarter is almost certain to be worse, especially now that approximately 30 million Americans have filed for jobless benefits. In April, consumer spending plunged 7.5 percent versus spending in March, marking the worst month-to-month change on record. For comparison’s sake, personal consumption expenditures (PCE) decreased 1.4 percent in September 2011, due to 9/11, and the same rate in November 2008, during the global financial crisis.

Several big-name retailers are expected to or in danger of declaring bankruptcy in the coming weeks and months due to the economic downturn. These include Neiman Marcus, JCPenney, Macy’s, Ascena Retail (owner of Ann Taylor, LOFT and Lane Bryant) and Gap Inc. are on analysts’ watch lists. J.Crew, whose history goes back almost 75 years, was the first big retailer to file for bankruptcy protection today.

In the second quarter, as was the case in the first quarter, gold mining stocks are set to shine on higher metal prices, which should translate to higher revenues and free cash flow. Last week I shared with you a list of gold producers that could be the most profitable on higher gold prices.

Stay safe and have a wonderful week!

Curious to learn more about the gold market? Click here to see my interview with Kitco News’ David Lin!

Holdings may change daily. Holdings are reported as of the most recent quarter-end. The following securities mentioned in the article were held by one or more accounts managed by U.S. Global Investors as of (03/31/2020): American Airlines Group Inc., Delta Air Lines Inc., United Airlines Holdings Inc.