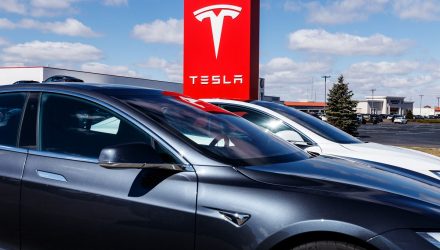 In what was one of the more incredulous product launches to date, Tesla debuted its $39,900 Cybertruck pickup this week. After explaining some technical specifications and smacking the truck’s door with a sledge hammer, company Chief Executive Officer, Elon Musk, asked an onstage companion (Tesla’s lead designer, Franz von Holzhausen) to assist in demonstrating the strength of the Tesla “Armor Glass” by throwing a solid metal, baseball-sized ball at the driver side window.

While no one would expect most standard windows could tolerate a beating like this, even Musk seemed surprised by the results, noting onstage at the launch, “We threw wrenches, we threw everything. We even literally threw a kitchen sink at the glass, and it didn’t break. For a little weird reason it broke now, I don’t know why.”

“We’ll fix it in post,” Musk joked, and then continued on to discuss the car’s suspension. The video went private on Tesla’s YouTube channel about 30 seconds after the live stream was over.

Despite the dramatic turn of events, hundreds of guests waited in line for an opportunity to take a two-minute ride in the cyber-truck, with many murmuring the phrase, “It’s growing on me.” While it is uncertain just how popular the truck will become, all of the invited guests at the event, and those watching online, will have at least a couple of years to decide if it’s grown on them enough to buy.
This is not the first automotive product launch to go awry. When Chrysler introduced its first minivan in November 1983, Chairman Lee Iaccoca drove it off the assembly line, accompanied by other executives. He exited the vehicle and waved to the crowd, but the sliding rear door wouldn’t open, trapping the men in the back. Fortunately, they were quickly rescued, despite the accompanying embarrassment to the Chrysler team.
Investors looking at ETFs with Tesla, to take advantage of the company’s latest innovations, could consider the ARK Industrial Innovation ETF (NYSEArca: ARKQ), the VanEck Vectors Low Carbon Energy ETF (NYSEArca: SMOG), the First Trust NASDAQ Clean Edge Green Energy Index Fund (NasdaqGM: QCLN), the ARK Next Generation Internet ETF (NYSEArca: ARKW), or the ARK Innovation ETF (NYSEArca: ARKK).
For more market trends, visit  ETF Trends.