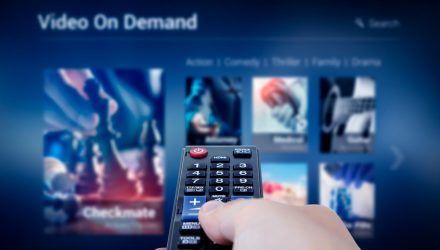 After Roku Inc.’s massive 2019 rally, which took the stock up a mind-boggling 450%, the streaming media company took a hit on Wednesday after a media giant, Comcast, made a move that undercuts the makers of streaming-media players.

Comcast Corp. CMCSA, announced Wednesday that it would be offering its Xfinity Flex box for free to those who subscribe to the cable operator’s internet-only plans. With the Flex, customers can to watch streaming services on their television sets with a “curated” interface that highlights live and new programming.

Shares of Roku ROKU,are getting battered today, off 11% in Wednesday trading, while Comcast’s shares are up 0.2%.

Roku has been a pioneer in streaming video gadgets. The company started as a hardware manufacturer, in its pioneering days, building boxes to enable viewers watch streaming content on their TVs. Now ROKU stock is driven by two revenue segments: Player, which represents sales of its digital media boxes; and, Platform, which includes advertising sales, licensing and other non-hardware revenue sources.

While the move in Roku is unsettling for investors interested in the stock, experts suggest that it could still be a good buy at some point, but that the up-move has been hyperbolic and needs time to settle down.

“This volatility today is not not the first day of this kind of volatility. Look, it’s clearly been a momentum stock. It’s overcome fundamentals and valuation. Momentum in the fundamentals has been very very strong, so it’s rewarded. But I don’t believe this is the kind of market you go into for overvalued equities and momentum trades. So when you come back down to earth, I don’t think it’s down to earth yet, and then you get involved,” said Steven Weiss on CNBC.
Others see looking into alternative stocks as a way to play the streaming market.
“I would say those streaming overall from a fundamental thesis in investing, it’s a good one. There’s a name I think I mentioned it last week, Akamai. I don’t think we talk about it enough. AKAM: $15 billion company. It’s been name to several of the stock indexes recently that focus on E.S.G., and it’s a way to play this wave into streaming. And I think it’s a little less volatile then what you’ve been experiencing at Roku,” said Joe Terranova from CNBC.

Disney’s new streaming service, Disney+, will launch on Nov. 12, and will include original movies and TV shows from the Magic Kingdom’s brands. The entertainment monster has recently announced that Disney+ will be streamed on the PS4 and Roku, which will potentially offer Roku stock price a boost as well.