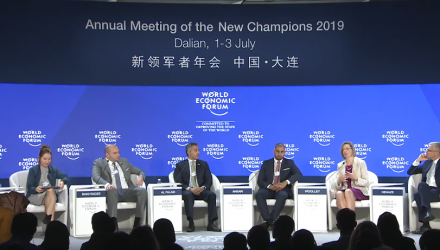 In two weeks, China will debut its Nasdaq-inspired board for technology companies developed domestically, which could put Chinese technology exchange-traded funds (ETFs) in play.

Per a South China Morning Post article, “Twenty-five companies will start trading on the Science and Technology Innovation Board, also known as the Star market on July 22, the Shanghai Stock Exchange said on its website on Friday night – eight months after President Xi Jinping announced his vision for the board.”

U.S.-China trade negotiations may appear to be at a standstill, but that doesn’t mean investors should sour their taste for Chinese equities, according to Lewis Kaufman, a portfolio manager at Artisan Partners.

U.S. President Donald Trump and Chinese President Xi Jinping recently met at the G-20 summit in Japan, agreeing to hold back on further tariffs until the two largest economies can iron out a trade deal.

The latest trade war news may have the capital markets inhaling a healthy dose of fresh air for the long-term. More specifically, the optimism from the latest U.S.-China ceasefire could last for at least a couple of months, according to J.P. Morgan.

“I think for now, markets have taken on a more optimistic and upbeat tone at least since the weekend. And I think this optimistic tone will continue for the next couple months,” said Jing Ulrich, managing director and vice chair of global banking and Asia Pacific at J.P. Morgan Chase.

That said, the debut of the 25 companies on the Science and Technology Innovation Board could spur heavy trading activity.

“There’s a high chance that you will see speculative trading on the first few days after the technology board starts,” said Dai Ming, a fund manager at Hengsheng Asset in Shanghai. “Although the IPO shares are already priced at high-flying levels, there are always speculators who are willing to buy on the secondary market, sending the stocks much higher before selling them.”

How can investors get a piece of this optimism for Chinese equities? Here are three China tech ETFs to consider: