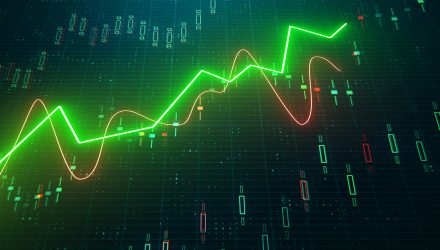 The S&P 500 closed at another all-time high for the third straight session at 2,945.83 while Apple shares surged after its earnings were released after the closing bell on Tuesday.

Apple earnings came in at $2.46, beating its EPS estimate by ten cents:

The earnings release presents significant opportunities to invest in tech heavy ETFs such as the Vanguard Information Technology ETF (VGT) or iShares U.S. Technology ETF (IYW), among others.

VGT’s industry breakdown looks roughly like this: 20% in systems software, 17% in hardware, storage and peripherals, 16% in data processing and outsourced services, 16% in semiconductors, 11% in app software, and a smattering of several other industries.

Apple, along with Microsoft, represent 30% of VGT’s holdings. This is an important number to pay attention to, as a substantial move in either of these two tech giants can frequently have a dramatic effect on VGT.

“There’s meaningful upside to the Apple story. I suspect that this year, Apple will be the best-performing FAANG stock,” Loup Ventures managing partner Gene Munster said Friday on CNBC’s Trading Nation segment. “I think this can be closer to $350 [a share]. … I know historically it has not gotten the multiple. But I think that will slowly change.”

When compared to the S&P 500, Apple has outperformed the benchmark index by 14% since the December low. The stock is up 39% since then, and 24% over the past 12 months.

Apple beats on top and bottom lines, raises dividend by 5%:

Apple beats on top and bottom lines, raises dividend by 5% from CNBC.