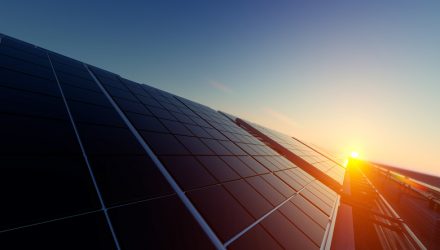 The Invesco Solar ETF (NYSEARCA: TAN) was among the best non-leveraged ETF performers on Thursday, rising 3.1%.

SunPower climbed after the solar panel maker surprised investors by posting a profit. The company revealed quarterly revenue of $436.3 million and net income was $121.5 million, or $0.75 per share after including a $137.3 million gain on a business divestiture and a $67.5 million gain on an equity investment, the Motley Fool reports.

Wall Street previously anticipated the company would lose 19 cents a share and bring in $440 million in revenue over the second quarter.

Baird analyst Ben Kallo believed Sunpower’s “presence in residential and commercial solar markets may be underappreciated” and that the company’s stock “is one way to gain exposure to energy storage,” Barron’s reports.

Kallo also noted that all of the company’s businesses exceeded expectations due to “solid execution” and specifically underscored that “commercial and residential businesses remain bright spots.”

SunPower CEO Tom Werner said “it’s a good time to be in solar” because of strong demand in key markets, along with the value proposition tied to storage and service additions on distributed solar, GreenTechMedia reports.

“As we look multiyear to the growth and profitability of SunPower, we have the focus on DG, our new [Next Generation Technology product] and storage and services, which become meaningful and very meaningful the following year,” Werner told GTM.

The solar panel company has strengthened from a tariff exemption it received from the Office of the U.S. Trade Representative during the ongoing trade uncertainty that has gripped manufacturers. The exemption has helped the panel maker keep costs down, allowing it to compete with Chinese imports and improve margins.

Looking ahead, SunPower also raised its full-year earnings guidance to $100 million to $120 million, compared to its previous projections of $90 million to $110 million.