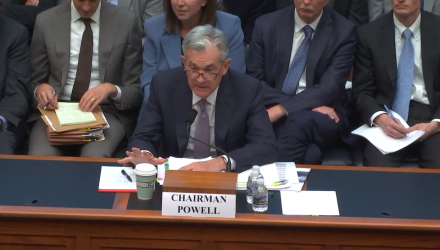 “Investors already got what they wanted when Powell’s statement was released. They got news that the Fed was ready to cut (interest rates) in July,” Michael Antonelli, market strategist at Robert W. Baird, told Reuters. “What the bulls are really hoping for is that this is just a growth scare. That the Fed steps in with an insurance cut in July and that’s it, so the economy can continue at its ‘muddle-along’ pace of growth.”

Powell assuaged fears that the strong jobs data did not fundamentally change the central bank’s outlook and pointed to other important economic data points before the July meeting.

The Fed Chairman said the economic outlook hasn’t improved in recent weeks, and “it appears that uncertainties around trade tensions and concerns about the strength of the global economy continues to weigh on the U.S. economic outlook.”

According to the CME Group, futures traders raised bets of a 50 basis point rate cut to 23% in response to Powell’s comments. Traders previously almost wrote off any aggressive reductions while still anticipating the first U.S. rate cut since the financial downturn at the upcoming July 30 to 31 meeting.

“Now everybody is really confident that the Fed is going to cut rates at the July meeting,” Shana Sissel, senior portfolio manager for CLS Investments, told the Wall Street Journal. “That’s put a lot of people’s minds at ease.”