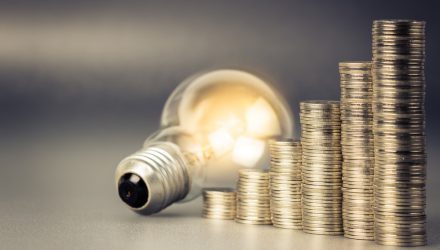 Exchange traded fund investors interested in growth opportunities should explore the next generation of innovator investments.

In the recent webcast, Ideas Over Intrigue: Targeting Innovation in Today’s Investing Landscape, Ryan McCormack, Factor & Core Equity Strategist, Invesco, focused on the Nasdaq-100, which as acts as the underlying index for the popularly observed Invesco QQQ Trust (NASDAQ: QQQ). He highlighted the constituents’ research and development that has acted as a key driver of innovation and economic growth.

Companies in the Nasdaq-100 spend more than twice as much in R&D, on average, compared to those in the S&P 500. Calculating R&D as a percent of sales in the last 12 months, Nasdaq-100 companies averaged 47% higher than S&P 500 firms.

“The underlying story for the rise in the Nasdaq-100 is that the U.S.’s economic growth is shifting from capital-intensive, traditional industries – Basic Materials and Oil & Gas – to the ‘new-economy’ sectors – Technology & Consumer Services,” McCormack said.

McCormack also noted that the fundamental data behind the NASDAQ-100 have drastically improved over the past decade, despite a volatile economy and the greatest financial market collapse since the Great Depression.

“Earnings, the most basic number to value a company, have skyrocketed, showing maturation of the companies as they increase revenues but reduce costs. Costs have been controlled, shares were bought back, dividends have increased and P/E has contracted,” McCormack said.

“The shift in NDX fundamentals has resulted in significant outperformance over other US large cap indexes,” he added, pointing out that the fundamental story has been the main driver of the long-run recovery.

In a bid to help investors target the up-and-coming growth names, Mark Marex, Research & Development Specialist, Nasdaq Global Information Services, highlighted the Nasdaq Next Generation 100 Index, which acts as the underlying index for the Invesco NASDAQ Next Gen 100 ETF (QQQJ).

“The upshot of the turnover analysis for the Nasdaq Next Generation 100 Index is, therefore, knowing that its constituents stand a good chance of graduating into the ranks of the Nasdaq-100, it presents a straightforward solution for investors to own those names earlier and at a higher allocation,” Marex said.

Nasdaq Next Generation 100 constituents have grown their revenues at a higher rate over the past decade, while the trend in earnings growth presents more of a mixed picture, Marex added.

“Compared to similar midcap benchmarks from S&P and Russell, Nasdaq Next Generation 100 constituents tend to engage in more areas of disruptive technology patents, on average. The index also exhibits a higher proportion of overall constituents registering some level of patent activity across these 35 patent sub-themes,” Marex said.