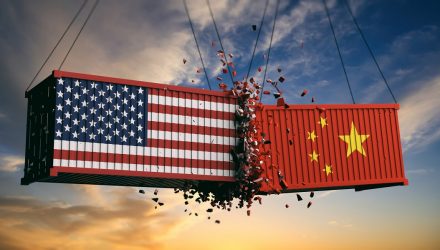 Chip Stocks Slump On No Trade Deal Comments From President

After recovery some of the catastrophic losses of the six-day selloff in the markets last week, markets are once again slumping on news that there will be no trade deal anytime soon, according to President Donald Trump.

“We are talking to China; we are not ready to make a deal, but we’ll see what happens…China wants to do something, but I’m not doing anything yet. Twenty-five years of abuse. I’m not ready so fast,” Trump said.

Trump said that the U.S. will eliminate any attachments with Chinese multinational technology company Huawei on Friday as well. The decision to block Huawei was arrived at after China stemmed buying American agricultural products in retaliation for the president’s unexpected tariffs threat last week. China also permitted its currency to depreciate against the dollar to a key level unseen since 2008, likely in an effort to make Chinese exports cheaper and outperform U.S. products.

Still, some analysts now feel that the president is looking to fight China on any front, and has now flipped from a trade war to a currency war, which can continue to create chaos for stocks.

“If there was any doubt, President Trump has clearly moved from trade wars to currency wars,” said Harvinder Kalirai, chief fixed income and FX strategist at Alpine Macro, in a note. He explained that the Federal Reserve will be driven towards hawkish easing measures if President Donald Trump persists in pressuring China. “Investors should incorporate intrinsic hedges to ride out market volatility and protect themselves from policy errors.”

Chip stocks in general are taking a pummeling Friday, with the Vaneck Vectors/Semiconductor ETF (SMH) down almost 2.5% on the news. Specific stocks that are targeted for selling include Micron Technology, which dropped more than 3% on Friday, and Advanced Micro Devices, which traded nearly 2% lower. Skyworks Solutions also sold off more than 4%. These chip stocks are all affected by Huawei, which has been a big customer of these chip makers.