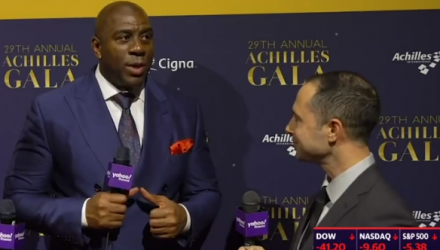 Los Angeles Lakers legend and Hall of Famer, Magic Johnson, has become well-known as a highly regarded entrepreneur. Johnson, whose net worth is estimated to be around $600 million, is the founder and CEO of Magic Johnson Enterprises (MJE). With an estimated valuation of $1 billion, MJE has invested in restaurants, entertainment venues and infrastructure projects. Johnson is also a part owner, through MJE, of the Los Angeles Dodgers, and served recently as the former president of basketball operations for the Lakers.

Despite his tremendous success however, Johnson expresses one regret. While the five-time NBA champion has made some fortuitously timed investment decisions, he laments not pulling the trigger on some free Nike (NKE) stock.

“I was 19 years old, just won that national championship after beating Larry Bird and I was about to sign a shoe deal. Converse came in and everyone at that time was wearing Converse because of Dr. J. So Converse came in and offered me some money. And then this guy named Phil Knight came in, and Nike was only like one or two years old. He said he doesn’t have a lot of money but will offer me stock. I was 19, didn’t know a lot. And, so the rest is history,” Johnson recalled in an interview with Yahoo Finance.

Johnson ultimately declined Knight’s offer with Nike in 1979 and instead signed with Converse. Of course, Nike went public on December 2, 1980, and has since become a household name in sports, with an over $30 billion valuation, and a stock price of about $93 per share recently.

Johnson however, is an American success story, and understands the meaning of dedication to a craft, as he’s demonstrated on and off the court. Sports marketing executive Christina M. Francis, 50, who in January became president of Magic Johnson Enterprises, understands just how hard Johnson works.

Francis gets to work at 6 a.m. and can be fielding calls from Johnson as late as 8 p.m. “There are no typical days,” she told the LA Times. “We work across all of our companies and support their business initiatives, work with what needs to happen with the Dodgers and the Sparks and others. We’re there to support them. Other than that, I’m vetting new business opportunities.”