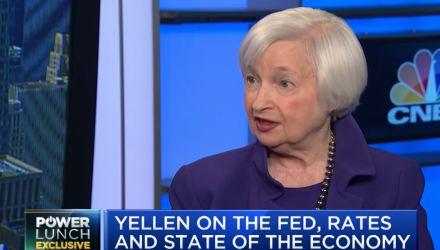 In a surprise move from her usual tendency to avoid engaging in a verbal fisticuffs with U.S. President Donald Trump, former Fed Chair Janet Yellen threw her own jab, saying in an interview with Minnesota Public Radio’s “Marketplace” that the president doesn’t have a grasp of economic policy.

“No, I do not,” Yellen tritely responded when asked if Trump “has a grasp of economic policy.”

“Well, I doubt that he would even be able to say that the Fed’s goals are maximum employment and price stability, which is the goals that Congress have assigned to the Fed,” said Yellen.” “He’s made comments about the Fed having an exchange-rate objective in order to support his trade plans, or possibly targeting the U.S. balance of trade. And, you know, I think comments like that shows a lack of understanding of the impact of the Fed on the economy, and appropriate policy goals.”

Yellen’s comments come as President Trump is citing progress in trade deal negotiations with China. Trump said he would delay any additional tariffs on Chinese goods while negotiations are still underway for a permanent trade deal.

Nonetheless, Yellen sees fallacies in the president’s views regarding trade.