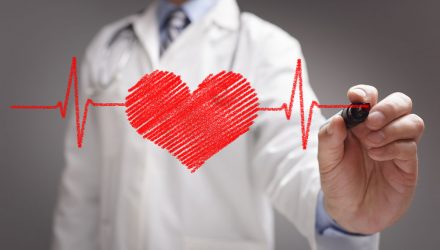 Healthcare providers sector-related exchange traded fund was among the best performers on Thursday, breaking above its long-term resistance, after the Trump administration withdrew plans to curb billions of dollars in annual rebates that drugmakers provided middlemen in Medicare.

President Donald Trump has for months been pushing to curtail the rebates worked out between drugmakers and third parties that manage benefits for Medicare, along with Medicaid managed care, where states contract with insurers to deliver benefits, the Wall Street Journal reports.

The Trump administration has made lower prescription-drug costs a top priority of his presidency and saw the end of rebates as a key component in his efforts to lower costs for American patients.

Currently, pharmacy-benefit managers, or PBMs, negotiate rebates and discounts on many prescription drugs, but the deals aren’t always passed along to customers at pharmacies.

“This proposal has the potential to be the most significant change in how Americans’ drugs are priced at the pharmacy counter, ever,” Health and Human Services Secretary Alex Azar said in January when the proposal was released.

However, the White House has withdrawn from the debate. The turnaround benefits the largest pharmacy-benefit managers, including Cigna Corp.’s Express Scripts, CVS Health Corp.’s Caremark and UnitedHealth Group Inc.’s OptumRx, which all surged on Thursday.

“Based on careful analysis and thorough consideration, the President has decided to withdraw the rebate rule,” Judd Deere, a White House spokesman, said Thursday in a statement. “The Trump administration is encouraged by continuing bipartisan conversations about legislation to reduce outrageous drug costs imposed on the American people, and President Trump will consider using any and all tools to ensure that prescription drug costs will continue to decline.”