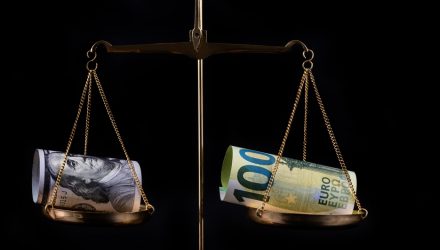 Euro ETF Has Taken a Beating, Traders Are Betting on More Pain

The euro currency and related exchange traded funds are taking a beating as the ongoing energy crisis and heightened geopolitical risks weigh on the Eurozone’s economic outlook.

The Invesco CurrencyShares Euro Currency Trust (FXE) has declined 11.9% year-to-date, with the euro currency now trading near parity against the U.S. dollar at $1.0044.

On the other hand, the ProShares UltraShort Euro (EUO), which provides a -2x or 200% of the inverse return of the U.S. dollar price of the euro daily, increased 26.9% year-to-date.

As the economic outlook of the Eurozone deteriorates, foreign exchange traders have been raising bets against the euro currency, with bearish bets on the EUR now surpassing levels last seen in October 2020 when COVID-19 was ravaging the global economy, Bloomberg reported.

While the euro currency saw a swift rebound following the COVID-19 pandemic fallout, investors at this time “appear to have been correctly adding to short EUR exposures,” according to BNY strategist Daniel Tenengauzer.

Taking long or short bets in the foreign exchange markets is nothing new, but BNY highlighted the extent of the bearishness this time around that stood out. Based on the stance and currency profitability against the aggregation of forward and swap positions, BNY calculated that traders are currently against the euro, U.S. dollar, the British pound sterling, and the Swiss franc.

A multitude of factors has weighed on the euro outlook, such as the geopolitical risk stemming from Russia’s invasion of Ukraine and the subsequent fallout from western sanctions on Moscow, along with elevated inflationary pressures and drought conditions that have weighed on crop harvests. Meanwhile, the European Central Bank’s ability to safely hike interest rates has been impeded by this weak economic outlook.

Meanwhile, the strong U.S. dollar remains a large hurdle for the euro. The U.S. Federal Reserve is still eying further interest rate hikes, which should support the USD, and safe-haven demand has helped support U.S. assets on the global stage.