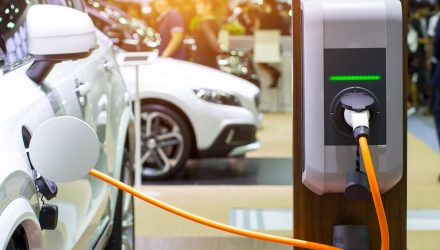 Shares of Tesla fell over 10 percent on Thursday as the company disappointed investors on Model 3 deliveries, which fell below expectations and hurt exchange-traded funds (ETFs) with the largest holdings of the electric carmaker.

ETFs with the heaviest weightings in Tesla were affected, such as the VanEck Vectors Global Alt Energy ETF (NYSEArca: GEX)–down 0.43 percent and the ARK Industrial Innovation ETF (NYSEArca: ARKQ)–down 1.26 percent.

“Tesla continues to struggle as a ‘real car company,’ with demand collapsing for the tired Model S/X platforms and higher priced versions of the Model 3,” Cowen analyst Jeff Osborn said in a note Thursday.

Tesla announced late Wednesday that it delivered 63,000 cars, which below analysts’ expectations of 76,000 deliveries. The company’s deliveries of the Model 3 midsize sedan were 50,900, which also fell below a FactSet estimate of 52,450.

Overall, Tesla said it produced 77,100 cars during the first quarter.

“This was a disappointing performance by Tesla, although the key Model 3 number was within the area code of Street expectations…The overall deliveries missed Street expectations, the all-important Model 3 deliveries were above whisper expectations and exceeded 50k this quarter which will be the focus of many bulls on the Street,” said Wedbush analyst Dan Ives. “That said, European and Chinese deliveries hit anticipated delivery logistics and were the main culprit for the overall miss which was disappointing to see and resulted in a soft quarter with profitability in the red for Musk & Co.”

To other analysts, the fall during the first quarter was expected as buyers of electric vehicles lost federal tax credits, which translates to a loss in sales.

“We do not find this slowdown in U.S. demand to be totally surprising or alarming,” Bernstein analyst Toni Sacconaghi told investors in a research note.