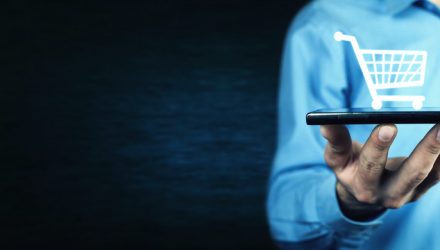 Amazon Prime Day is just around the corner, a reminder that online shopping is gaining an edge over brick-and-mortar shops and investors can tap into the shifting trend with ETF strategies.

“Online sales still only make up about 12% of total global retail sales,” ProShares’ Global Investment Strategist Simeon Hyman said in a note. “Even as global e-commerce sales doubled over the last 5 years to about $2.8 trillion annually, the rapid adoption of online shopping is likely to continue as more global consumers start using mobile devices and gain handheld access to the Internet.”

Specifically, Hyman pointed out that over 340 million people have become digital shoppers since 2014, adding to a population that is expected to surpass two billion people by 2020, or a 19% surge from current levels.

Looking ahead, by 2020, online sales are projected to surpass $4 trillion, with the biggest players in the field largely expected to capture a major share of the growing pie. For example, Amazon is estimated to account for half of all online sales by 2023. Meanwhile, the Chinese online retailer Alibaba has also exhibited its presence in the e-commerce segment after setting a Singles Day record in 2018 with more than $30 billion in sales over a 24 hour period.

Amazon, of course, is also about to set off its fifth-annual Prime Day on July 15. Last year, shoppers purchased over 100 million products, with sales tallying an estimated $4.2 billion for the day.

The ProShares Online Retail ETF tries to reflect the performance of the ProShares Online Retail Index, which includes companies that principally sell online or through other non-store channels, such as mobile or app purchases, rather than through bricks-and-mortar store locations. Component holdings must be classified as an online retailer, an e-commerce retailer, or an internet or direct marketing retailer, according to standard industry classification systems.

The Decline of the Retail Store ETF provides daily short exposure or -1x to the new Solactive-ProShares Bricks and Mortar Retail Store Index, which is comprised of traditional retailers and equally weights components. The fund holds companies that include department stores, supermarkets and sellers of apparel, consumer electronics and home improvement items, such as retailers like Barnes & Noble, The Gap, Macy’s, Kroger and Best Buy, among others.

Lastly, the Long Online/Short Stores ETF is a type of long-short strategy and the first ETF to track the potential growth of online companies while benefiting from the decline of bricks and mortar retailers. Specifically, CLIX reflects the new ProShares Long Online/Short Stores Index, which combines a 100% long portfolio of on-line and non-traditional retailers with a 50% short position in bricks and mortar retailers.