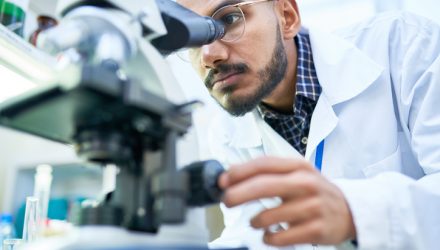 Healthcare and biotechnology-related ETFs are taking a blow as drug-pricing reforms weigh on the sector outlook.

The biotech segment and broader healthcare sector have underperformed the broader market as investors exited positions in response to growing discourse over policy proposals aimed at reducing drug prices in Washington, Bloomberg reports.

While some argued that impeachment talks may have drawn politicians’ attention away from the drug pricing issue, Pangaea Policy founder Terry Haines warned that it’s unlikely to relieve the pressure.

“Pharma should not breathe a sigh of relief,” Haines said in a research note. “Drug pricing reform could be added to the spending bills (Trump could insist on it), and it would be in both parties’ political interests to do so.”

Haines argued that Democrats may be trying to show voters and Wall Street that they are willing to address major issues with bipartisan support.

The move to impeach Trump “adds to an already nebulous environment around broader health-care policy changes,” Jefferies strategist Jared Holz said. “We do not foresee meaningful inflows into pharma or biotech until the coast is clearer, which could take additional time now.”

Goldman Sachs analysts led by Terence Flynn also warned that the topic of drug pricing could continue to overshadow the sector. The analysts calculated that the biopharma group is trading at 11.5 times 2020 estimated earnings, compared to 16-17 times for the S&P 500, so policy risk may have already been priced into the market.

Looking ahead, Goldman highlighted a number of negative factors that could weigh on the sector, including a Senate Finance bill, House Speaker Nancy Pelosi’s drug pricing bill, Trump’s plans for an international drug pricing index and proposed changes to Medicare’s Part B.

“Pelosi’s bill has no chance in the Senate, impeachment proceedings or not,” Bloomberg Intelligence analyst Brian Rye said. Nevertheless, “there are areas of agreement that can lead to a bill on Trump’s desk that he would sign late this year if leaders want that to happen.”