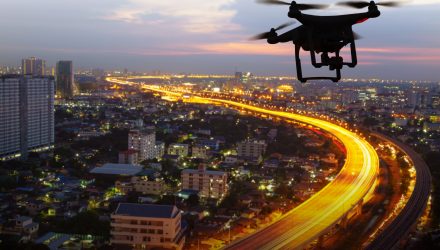 Along with other some other thematic exchange traded funds, the ETFMG Drone Economy Strategy ETF (NYSEARCA: IFLY) was drubbed last year, but the first ETF dedicated to drone-focused stocks is rebounding in 2019.

“In December, the technology was in the headlines when suspected drone sightings grounded flights at Gatwick Airport in the U.K. While such incidents paint the industry in a bad light, the broader story is more positive, says Robert Saffer, global head of ETF sales at ETFMG,” reports Gerrard Cowan for the Wall Street Journal.

There are myriad uses for drone technology, a factor that could be a boon for IFLY over the long-term.

IFLY holds 53 stocks, nearly 60% of which hail from the aerospace and defense sectors. Technology stocks, including semiconductor names, are also well-represented in the fund.