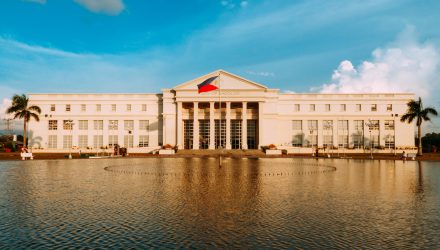 While the U.S.-China trade deal remains the biggest mover and shaker for exchange-traded funds (ETFs) in Southeast Asia, one geopolitical event that could affect one country, the Philippines, is the mid-term elections. Its results could have tangible implications for the iShares MSCI Philippines ETF (NYSEArca: EPHE).

Current Philippines president Rodrigo Duterte is in the midst of his third year in the country’s highest office, and more importantly, his tenure is garnering stratospheric approval ratings. The mid-term elections could sway the influence of the president in the Philippine Congress if the results happen to fall in his favor.

“Mid-term elections are often a ‘referendum’ on the performance of the incumbent,” Citi analysts wrote in a note this month. “The president’s strong rating is definitely helpful for the pro-Duterte election candidates.”

EPHE seeks to track the investment results of the MSCI Philippines Investable Market Index (IMI). The index is a free float-adjusted market capitalization-weighted index designed to measure the performance of the Philippine equity markets.

The ETF is up 9.60 percent, which trails the S&P 500 right now, but that could change should a China retaliation on the latest U.S. tariffs put capital markets in the U.S. in a state of volatility through 2019. As for EPHE, a mid-term election results could see the Philippines implementing some much-needed policy measures that could boost the economy.

Why Consider the EPHE Now?

Duterte’s party, PDP-Laban, has a stranglehold on the government’s House of Represenatives and is expected to remain as such following the mid-term elections. However, what could tip the scales is obtaining majority in the Senate.

The Senate has been a thorn in President Duterte’s side, going as far as blocking the Philippine budget, which stymied the country’s economic growth during the first quarter. Q1 GDP fell almost 1 percent in the first quarter of 2019 compared to a year ago–5.6 percent from 6.5 percent.

That’s likely to change based on the latest polling indications.

“Polling suggests Duterte’s allies are likely to secure 10 or 11 of the 12 seats up for grabs, with the possibility of a clean sweep. This is due to the coattail effect of riding on the president’s gravity-defying approval ratings,” said Peter Mumford, practice head for Southeast and South Asia at risk consultancy Eurasia Group.

“This points to Duterte having the support of 18-20 of the 24 senators after May,” Mumford added.

A Duterte-friendly Senate could certainly help with the passage of his policy plans, such as tax reforms. This could pave the way for economic prosperity and in turn, benefit the EPHE ETF moving forward.

“A quick passage of all tax reforms should help to secure funding for infrastructure projects, lift economic growth potential, but increases current account and fiscal deficits,” analysts from Citi posited.