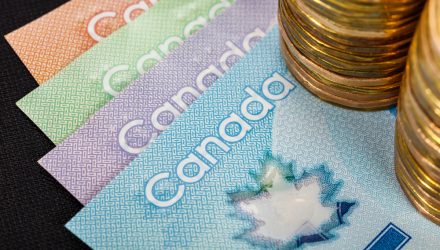 Foreign exchange markets aren’t for the risk averse, especially when it comes to dealing with a pandemic that’s seeing a higher number of cases rise globally. That being said, it does help to use currencies as a hedge, for short-term gains or for long-term holds, with funds like the Invesco CurrencyShares Canadian Dollar Trust (FXC).

Getting currency exposure via a ETF wrapper could help mute downturns when markets start to experience wild swings. That said, as market positivism permeates the forex markets amid a potential vaccine on the way, investors might be apt to take on more risk with currencies like the Canadian dollar.

When looking at its YTD chart, FXC bounced above its 50-day moving average and looks to be ready to breach that overbought level. Traders may want to watch whether it heads into the 70 overbought level and wait for a pullback before entering.

Outperforming the Yen and Greenback

The U.S. dollar and the Japanese yen have been a pair of go-to safe haven currencies, especially amid the pandemic, but don’t look now–here comes the Canadian dollar.

“The Canadian Dollar has largely outperformed its haven-associated counterparts in November, climbing over 2.5% against the Japanese Yen and US Dollar,” a DailyFX article noted. “These gains look set to continue in the near term, with the currency aiming higher on the back of a historic expansion in economic activity and the provision of additional fiscal stimulus. Canadian GDP is estimated to have grown 47.6% – on an annualized basis – in the third quarter, as businesses reopened and consumers spent their government subsidies.”

One of the fundamental drivers for the rise in the Canadian dollar has been increasing retail sales.

“Retail sales have rebounded robustly from the April nadir, climbing back to pre-crisis levels just two months after the nation recorded its largest fall in consumer spending,” the article added. “The local housing market has also recovered strongly as buyers take advantage of record low interest rates, driving prices over 16% higher when compared to the same time last year.”