You are at:Home»Innovative ETFs Channel»Blockchain ETFs Surge on Speculation Amazon Could Accept Crypto 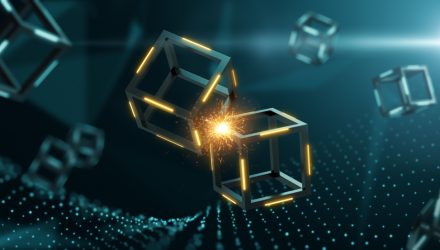 According to an anonymously sourced report in the London newspaper City A.M., Amazon has plans to accept the cryptocurrency bitcoin by the end of 2021.

“This isn’t just going through the motions to set up cryptocurrency payment solutions at some point in the future—this is a full-on, well-discussed, integral part of the future mechanism of how Amazon will work,” the anonymous source told City A.M.

The insider stated that bitcoin would be the first of eight cryptocurrencies Amazon could accept. The individual also claimed that Amazon’s crypto plans have been in the works since 2019, and it “won’t take long” for the company to fully accept crypto as a form of payment for its online transactions.

Furthermore, Amazon may even begin developing its own cryptocurrency, allowing shoppers to earn rewards for paying through Amazon’s “native coin.”

Adding credence to the anonymous insider’s claims, Amazon revealed it was hiring a cryptocurrency expert, BBC News reports. Amazon is advertising for a “digital currency and blockchain product lead” to look at “how Amazon’s customers pay.”

“We’re inspired by the innovation happening in the cryptocurrency space and are exploring what this could look like on Amazon,” an Amazon representative said. “We believe the future will be built on new technologies that enable modern, fast, and inexpensive payments, and hope to bring that future to Amazon customers as soon as possible.”

The cryptocurrency market and blockchain segment may have also received a boost from an increasingly bullish outlook after Tesla CEO Elon Musk remarked that the electric vehicle maker could begin accepting bitcoin as a form of payment again. Additionally, Twitter CEO Jack Dorsey recently stated that the company sees if cryptocurrencies can be incorporated into its operations.