You are at:Home»Innovative ETFs Channel»Bitcoin Climbs as Much as 40% Over The Weekend 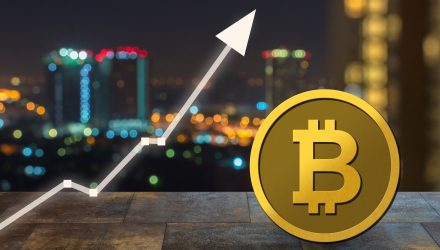 Bitcoin Climbs as Much as 40% Over The Weekend

Bitcoin kicked off the weekend with a bang for the bulls, rising as much as 40% within a 24-hour period. The leading cryptocurrency hit a low of $7,300 prior to the weekend before surging just over $10,000, which signaled its largest price move since April.

Bitcoin got a boost from China President Xi Jinping saying that the country should “seize the opportunity” of cryptocurrency’s blockchain technology. Since the trade war with the U.S., China has been making moves to bolster its technology sector and blockchain could be one of the key areas where it has a competitive advantage over the U.S.

“We must take the blockchain as an important breakthrough for independent innovation of core technologies,” Xi said at the 18th collective study of the Political Bureau of the Central Committee in Beijing.

“We must clarify the main direction, increase investment, focus on a number of key core technologies, and accelerate the development of blockchain technology and industrial innovation,” Xi said.

The second largest economy is already taking the first steps to ease restrictions on cryptocurrencies and blockchain–its underlying technology. Per a MarketWatch report, “The Standing Committee of the 13th National People’s Congress in China has passed a new law regulating cryptography on Oct. 26 that will take effect on Jan. 1, 2020, China’s CCTV reported.”

“The new regulatory framework aims to set standards for the application of cryptography and the management of passwords and establishes the role of a central cryptographic agency meant to lead public cryptographic work, creating guidelines and policies for the industry,” the report noted.

China’s moves to further blockchain technology could open up pathways for other countries to follow suit. Cryptocurrencies like Bitcoin has been associated with fraud and money laundering schemes, which has prevented nations from embracing the technology wholeheartedly.

“It’s bullish for the entire crypto industry, in general, when you have the leader of one of the world’s largest economies coming to embrace blockchain technology like this,” eToro senior market analyst Mati Greenspan said.

According to a CNBC report earlier this month, the second largest economy “announced earlier this year that it was working on a digital currency backed by the yuan, reportedly inspired by Facebook’s announcement. Analysts and crypto industry leaders are highlighting geopolitical implications of China launching a digital currency first — especially if libra hits a brick wall with U.S. regulators.”