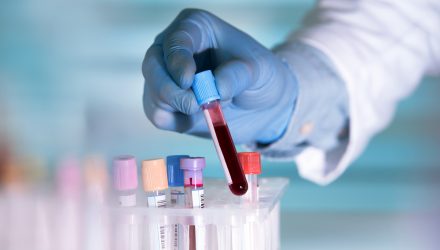 Biotechnology sector-related exchange traded funds were among the leaders on Tuesday after the Department of Defense provided funding to Inovio Pharmaceuticals (NasdaqGS: INO) to scale up manufacturing of a DNA vaccine for the novel coronavirus.

Inovio was among the first groups to tackle the COVID-19 problem back in January, and now, the company has advanced to human testing and scored a $71 million contract from the U.S. government for a delivery device of the potential vaccine, FIercePharma reports.

The U.S. Department of Defense granted a $71 million supply deal with the biotech firm to manufacture devices that use electrical pulses to deliver the company’s vaccines into the skin.

According to Inovio Pharma, the new device runs on AA batteries and can “function reliably in challenging environments,” which can be beneficial during pandemics when vaccine demand is extremely high and can be utilized more efficiently in some areas of the world suffering from inadequate health systems and supply chains.

The contract “further supports Inovio’s large-scale production of devices and arrays to deliver potentially hundreds of millions of doses of INO-4800 next year to combat the global COVID-19 pandemic,” Inovio CEO Joseph Kim said in a statement

Inovio’s DNA vaccine is called INO-4800. The government contract will scale up the manufacturing for CELLECTRA 3PSP smart device and the procurement of CELLECTRA 2000 devices, which are used to deliver INO-4800.

After phase 1, the company hopes to start a phase 2/3 trial in July, Kim previously told FierceBiotech. However, Americans should note that the company expects the study to take about a year, so a finalized solution may not come out any time soon but the company may push for emergency approval before the trials end.

According to the World Health Organization, Inovio’s DNA vaccine is one of 13 COVID-19 programs worldwide in human testing.