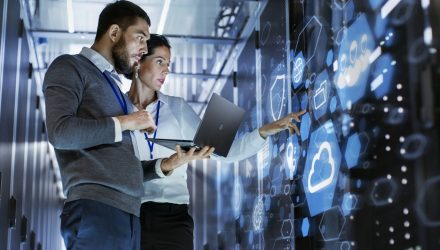 When investors think of stocks that have been hit the hardest and stand the most to lose during a protracted trade war between the United States and China, Apple (AAPL) is at the top the list. But is the tech mainstay really likely to suffer if trade negotiations don’t go smoothly?

After a sharp selloff in weekend pre-market trading following an news that President Trump announced an additional duty on some $550 billion of targeted Chinese goods on Friday, ordering American companies to exit China, just hours after China unveiled retaliatory tariffs on $75 billion worth of U.S. goods. Trump appeared on Sunday to back off on his threat to order U.S. companies out of China, Apple’s stock is helping lead U.S. stocks higher on Monday, buoyed by the possibility of re-opened trade negotiations with China, but a couple of Wall Street firms say the technology behemoth is even better positioned than some might imagine if the trade war persists.

“While the tariffs and trade standoff contributing to a softer macro backdrop are a source of earnings risk for Apple, we see certain silver linings relative to timing that might allow Apple to navigate the challenging dynamic better than investors currently expect,” J.P. Morgan analyst Samik Chatterjee said in a note to investors.

What J.P. Morgan views as one of  key buffers in the ongoing trade war is the optimal timing of Apple’s new line of iPhones, set to launch next month. The firm approximates that the iPhone is 55% of Apple’s revenue.

Chatterjee explained that the iPhone launch will avoid a bill-of-materials increase in cost of between $30 to $50 per iPhone, permitting Apple to better withstand the cost of the tariffs without raising prices yet for U.S. buyers.

Other analysts tend to agree with Chatterjee.

D.A. Davidson analyst Tom Forte noted that his firm views “China as the greatest risk for AAPL,” claiming that the technology company’s dependence on China for materials and its sales to Chinese consumers put it at risk. Still, D.A. Davidson has a buy rating on Apple with a $270 a share price target.

“That said, we believe the situation may not be as bad as investors’ fear,” Forte said.

Forte stated that the Silicon Valley giant has done “an amazing job” of assuaging the impact of tariffs, by working with the U.S. government. Apple has worked to get an “exclusion of products from previous tariffs and the delay of a tariff to enable it to have, at least, one more window of opportunity to sell next-generation iPhones without being affected by tariffs,” Forte noted.

“We believe Apple is one of the few U.S. companies that has the ability to lobby BOTH the U.S. and Chinese governments to minimize the impact of tariffs on it,” Forte added.