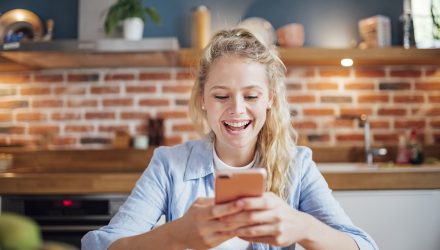 With the S&P at record highs today on heels of trade deal optimism, the Technology SPDR (XLK) continues to be a pacesetter. The ETF is up nearly 40% year to date and up an additional 1% today.

One of the biggest drivers of the move today however, is Apple, which is up almost 1%, after receiving an injection from Qualcomm, who cited strong quarterly results after a deal with Apple.

While Apple has had quite a run this year, some analysts are still optimistic that the tech giant could have more in the tank.

“I think the interesting thing is that most people look at Apple’s performance year to date and say, oh my God the stock’s run so much, it’s up 60% year to date, there’s material out performance behind us, so there’s really not much room to run,” said Wamsi Mohan, senior equity analyst at Bank of America Merrill Lynch on CNBC.

Mohan notes that much of Apple’s performance has been tied to iPhone cycles, and that investors could learn a lot from observing stock performance statistics gleaned from these iPhone launches.

“We think the discussion should really be focused on how did Apple perform since the last iPhone launch. Investors are really focused on these iPhone cycles, and so we went back and looked at how Apple performs historically relative to the S&P and an absolute terms from one cycle to the next cycle, and what we see is that this last cycle was actually a very poor cycle. Heading into the iPhone 11 launch you actually got an 8% relative decline to the S&P since the launch of the last iPhone to the release of the iPhone 11. So to put this in context, in past cycles where you’ve had that sort of under-performance, you’ve actually followed by material out-performance, which is what we think is the case heading into the 5G launch,” Mohan added.

Perhaps more important than the technological changes to the new iPhone however is the fact that iPhones will now be able to integrate 5G technology, which has the potential to really change the space the way LTE technology did.

“I think when you look at past cycles, the real out-performance that you’ve actually gotten was when the iPhone 5 was launched, which was the change in the carriers LTE adoption. It was not really in the form factor change. You got some really nice incremental performance, both with the iPhone 6 launch and with the iPhone X launch, which were form factor, but you really got the best of performance in past cycles for LTE. We think a use case like 5G, which can significantly improve what you can do with the phone, is going to be much more critical. So we actually think that looking forward into 5G over a multi year cycle, Apple has the opportunity to start to dominate the discussion…”

In addition to XLK, investors looking for ETFs with healthy allocations of Apple can look into the Fidelity MSCI Information Technology Index ETF (FTEC) or the iShares U.S. Technology ETF (NYSEArca: IYW).